As a young boy Houston grew up in an international church in Slough where his mother encouraged him to take part in the choir; although his confidence in singing back then was minimal, he found himself sitting at the back and observing. This is where he found a fascination and underlying talent for melody – he’d hum under his breath to the traditional choir ballads and create contemporary melodies that aligned with the current music climate and his interest in grime music. His EP hit 100k streams within the first week and with a feature with Schafter, the top 10 in Poland with 60 million streams on its way its only time that will stop his come up. His unshakeable talent and eye- catching uniqueness certainly hasn’t gone unnoticed having been chosen to perform at RCA’s ‘Ones To Watch’ showcase last year as well as performing alongside Yung Fume, Avelino and more. With a sell out headline show his stage presence and audience engagement almost matching, if not, surpassing that of these already heavily cemented artists in the scene. With previous tracks picking up support from various industry moguls, a Highsnobiety premiere and BBC 1Xtra premiere all under his belt, as well as backing from all specialist radio stations (just in the first few months of seriously making music) as well as rapidly picking up fans and more of a cult following at every single performance he does, the future is looking abundant for X. 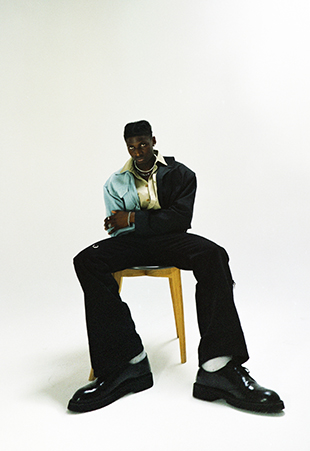