The word polyglot – meaning someone who speaks three or more languages – is an accurate description of Backroad Gee (he speaks four) as well as an onomatopoeia for the way he raps. His bars and rowdy choruses bunch rounded pops and guttural rumbles around sharp ticks and clacks. He switches deftly from burly street boasts into tongue rattling sound effects, and back to a throaty croon that wouldn’t sound out of place in a pulpit.

‘Party Popper’, Backroad’s breakout hit that arrived on the very first day of 2020, is as good an example of this striking approach as you’ll find. After a surging couple of years, UK rap fans had begun to fear a stale period of recycled flows and identikit beats. In a shade over three minutes, Backroad put those fears to rest. The way the track’s official video bounced around social media in the weeks after its release was testament to its startling appeal.

But the nature of a viral hit is that everyone will be paying a lot more attention to what you do next. They’ll have a high expectation. And there’ll be plenty of people willing you to fail too. Backroad is not just prepared to defy these expectations, but absolutely intent on surpassing them.

The 23-year old Congolese Londoner followed up ‘Party Popper’ with a batch of remixes assisted by a bunch of other rising stars – including Ambush, Pa Salieu, TeeZandos, Karma, and Trizzac – before dropping the ​Mukta vs. Mukta​ EP to a feverish reception. He’s been playlisted by BBC 1Xtra, included on Spotify’s influential Who We Be, New Music Friday, and Rap UK lists, as well as Apple Music’s flagship Agenda, and No Signal’s ones-to-watch yearbook for 2021. Complex, Clash, DJ Mag and more have sung his praises. That all of this has happened against the backdrop of a pandemic and national lockdowns has barely phased Backroad. “The only thing that’s a bit pants about it is I can’t do any shows,” he says.

While lockdowns slowed much of the world down, Backroad’s fidgety, expressive energy was channeled in the studio. And he was fielding calls from newfound musical admirers too – lots of them. “Can you believe I walked into the room with Burna Boy and the guy says ‘Yo, I’m your biggest fan,’” says Backroad, apparently still reeling from the experience. “I said, ‘I’m dizzy, where’s the weed?’”

As well as recording two tracks with the African Giant (who, just a matter of months before, Backroad had identified as his “dream collaboration”), he’s worked with Stefflon Don, Naira Marley, and a host of grime veterans including D Double E, Ghetts, JME, and Lethal B. And then there are his link-ups with Pa Salieu: rapturous studio clips trailed the first single, ‘My Family’, which officially arrived with a stylish video in September; the pair have reportedly got more than a mixtape’s worth of material recorded between them.

In total, Backroad says he’s currently sitting on more than 300 finished songs. Not bad for just over a year’s work.

Last year, Backroad was sitting in a prison cell, doubting himself. On release, he struggled to stay away from the life that had landed him in jail. But guided by his faith (having converted to Islam) and encouraged by friends, relatives, and mentors – the extended “fam-a-lee” he shouts out on his tracks – he committed himself to the one true constant, other than family, in his life: music.

Bouncing around London with his mum as a youngster (he’s lived in all corners of the capital, and currently calls East Finchley home), life was soundtracked by Congolese soukous, rumba, and ndule. Backroad played the drums in Christian church bands, learned the keyboard and guitar, and discovered a talent for singing. Uncles introduced him to rap music from the US – he namechecks Styles P, LOX, KRS One, Wu Tang, and The Fugees – while Channel U brought grime and garage into his living room.

He copied bars from his elders, slowly replacing words until the lines were his own. He wrote his first from scratch when he was 13, around the same time he’d peer down from the top deck of the bus riding through Plaistow to see Ghetts and Griminal hanging outside the Greengate pub. How does it feel to be sharing studios with the groundbreaking grime MCs he grew up on? “I’ve processed it, but it’s mad. Mad stuff like that just seems to happen to me.” By 14, he was spitting bars on the bus and emulating his heroes in the playground.

It was around that time that Backroad fell out of education. He left school before completing his GCSEs, and says he felt pressure to make something of himself as a result. A heavy weight for 14-year-old shoulders to bear. He drifted through periods of homelessness, felt fractures emerge in his family life, and found himself quick to anger. He was forced to grow up fast – too fast.

It’s these years that he reflects on in his music, recounting his lived experiences – “real life stuff,” he calls it – while marking bemusement, sometimes irritation, at those who seem willing to capitalise on exaggerated, even invented accounts of street life. For Backroad, it’s simple: he’s changing his life and the fortunes of his family, and it’s music that’s enabled him to do that.

He understands his newly gained influence and responsibility. He takes youngsters along to video shoots and studio sessions to show them what’s out there for them, if they’re willing to work at it – to put their all into it.

To watch Backroad in the studio is to understand what ‘putting your all in’ truly means. He won’t settle for rapping on readymade beats: instead, he sits and emits pops, bangs, booms, and cracks from his mouth that his producers scramble to translate into drums, claps, basslines, and riffs. He dances constantly. It’s difficult to put Backroad Gee’s appeal into words – mostly because he’s invented so many of his own. His own idiosyncratic slang terms that pepper his WhatsApp voice notes and Instagram Live broadcasts make their way into choruses and adlibs. The result is a dizzying mélange of sounds that gradually he shapes and sands down into something lean, physical, and infectious.

On his forthcoming debut mixtape, ​Summer Ina Da Winter​ (the title a reference to the blending of dark and light on the record), he stomps over drill, flows staccato on throwback rap, glides through bouncing Afropop, and grins on as peers and elders try and emulate his unique approach to employing his voice as an instrument.

Once lockdowns lift, he’s intent on making a first visit to the Congo to connect further with the culture that he holds so close. He boasts that when he speaks with friends in Africa, they tell him he sounds local. The world, Backroad says, feels small to him – and he’s ready to conquer it, in his own way, speaking his own unique musical language. 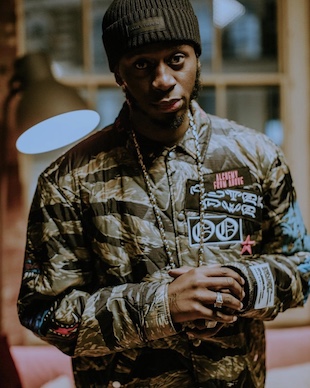