Hailing from San Diego's Logan Heights neighborhood, Beach Goons was the brainchild of Pablo Cervantez, the band's vocalist, guitarist, and sole constant member. Beach Goons started innocently enough with Cervantez and a couple friends picking up instruments and playing out, hitting up any place that would have them, from their middle school to Logan Heights' library. As the band grew, their sound evolved with them. Their early singles showed a brash, garage-indebted take on punk, but by the time of 'BoiSad', the edges began to smooth, and more of Beach Goons' personality began poking through. For their new album, 'hoodratscumbags', Beach Goons didn't rush things, instead spending the better part of two years workshopping the songs until they became the most potent examples of what they wanted to express.

"Most of the songs were scrapped or I rewrote them," says Cervantez of the writing process. "It was just going to be an EP, but it got to a point where we had enough songs for it to be an album." The product of all that work is 'hoodratscumbags', which GRNDVW Recordings will release on September 7, and sees drummer Chris Moran and bassist David Orozco joining the ranks. Across the album's 10 songs, Beach Goons effortlessly blend genres, taking a bit from punk and surf, to authentically express their lives and where they come from. "We're from a Mexican community, we're all Mexicans, and we really love showing it," says Cervantez. "[Logan Heights] is the heart of Mexican culture, and the heart of Chicano culture, and I really want to emphasize this was our upbringing and this is who we are."

Songs like 'A.M' and 'The End' show the album's breadth, as Beach Goons write airtight pop songs, but come at them through the side door. The songs twist and turn, revealing their ability to surprise a listener without ever breaking their stride. "I feel more confident writing and releasing this than I ever have," says Cervantez of 'hoodratscumbags', and that's something that's noticeable on first listen. Beach Goons are pulling off moves that put them in a class of their own, taking the best of bands like Wavves, Joyce Manor, and Culture Abuse, and framing it in their own way.

"My family moved here, I'm first generation," says Cervantez, "I just want to show those people that if you come from these streets, if you come from these hoods, you can do it too." That sense of community, and Beach Goons' sheer excitement, permeates the entirety of hoodratcumbags. It can be heard in songs such as 'Chunti,' where Cervantez sings in Spanish and holds nothing back. It's moments like these that show Beach Goons for what they are: a band that's young, excited, and not afraid to show the world the full scope of themselves. Beach Goons will be touring in support of 'hoodratscumbags', including an appearance at Riot Fest in Chicago, spreading their message, and sharing their joy, with anyone that listens. 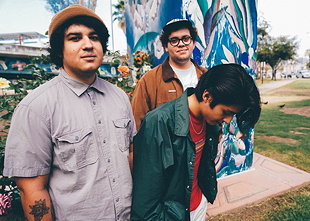