BLOXX are a brand new 4 piece from Uxbridge who's new track 'You' is unveiled to the world today in anticipation of its release on the 14th April 2017.

Super-infectious teenage grunge-pop is the order of the day on the dazzlingly catchy 'You', which sits perfectly alongside its fellow A-Side and previously shared 'Your Boyfriend' on the brand new release on Chess Club. Released on the 14th April, the double A-side record will be also be available as an exclusive 7 inch vinyl on May 12th.

West-London born and raised, BLOXX are already showing all the right signs of becoming on the UK's most exciting new prospects. They've already been picked out by Radio 1 (Mistajam / Phil Taggart / Huw Stephens) and had nearly a quarter of a million streams on 'Your Boyfriend' on Spotify. BLOXX follow in the footsteps of MO, Sundara Karma, Skott and Wolf Alice in releasing their debut single through the London-based Chess Club Records. If things carry on this way, it looks like little will be able to stop BLOXX's ascension - stay tuned.

In May they head out on the road with The Night Cafe. 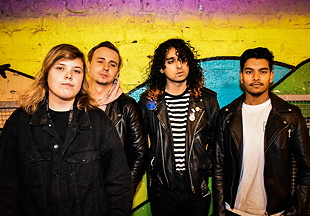