Jaz Karis is a young singer-songwriter from the UK who is known for her deep lyrics and luscious vocals. Growing up in South London, Jaz listened to a vast array of gospel, soul, jazz, RnB, reggae, and old school classics. She became the youngest member of her local gospel choir aEer taking classical piano and singing lessons early on. GraduaFng from The Brit School, Jaz fine-tuned her musical skills at the same school as some of her biggest influences, Amy Winehouse and Adele.

Then in 2017, unmanaged and unsigned, Jaz dropped her criFcally acclaimed first EP Into The Wilderness. The top single “Sugar Don’t Be Sweet” was played back to back on MistaJam’s BBC Radio 1Xtra show and the success of the project lead to her first sold out headline show in London in 2018.

Next came the release of “Pre\y Dreamer/Pe\y Lover” with “Pe\y Lover” becoming Jaz’s breakout single. Her performance of the song on COLORS, Berlin’s popular online series, is a viral success with over 10 million views to date. She also dropped a 4-track live EP Live at The Diary which contained both original songs and covers.

2019 saw Jaz head in a new direcFon, working with different producers, wriFng more songs and co-direcFng her own videos. She even released a single “Doubt My Love” under NAO’s Li\le Tokyo Recording followed by another single “Fairytales” before landing her first placement as a songwriter for “Secrets” on JusFne Skye’s EP Bare With Me. She ended the year with the release of her third project, an EP called Summer Stories, and her second sold out headline show at Omeara in London.

Jaz started 2020 with 2 strong features, “Soweto Blues” for afro-beats producer Juls and “Rose Tinted Glasses” for rapper Jords. Then the pandemic hit and while stuck at home, Jaz wrote, recorded, and engineered her latest EP All Eyes On U by herself in her bedroom. Released with no markeFng support, the project has become a sleeper hit with over 1 million streams in just over one month.

2021, Jaz has dropped a release with visuals every month so far and conFnues to deliver such solid music. With a longer project on the way & more features to come, this is set to be an exciFng year for Jaz.

Now a staple on every major UK R&B playlist and regularly featured on R&B lists everywhere as “One To Watch”, this is only the beginning. So stay tuned for much more music and content, but most importantly listen to Jaz Karis when you want to escape this troubled world and lose yourself in a soundscape of soulful jazz and RnB. 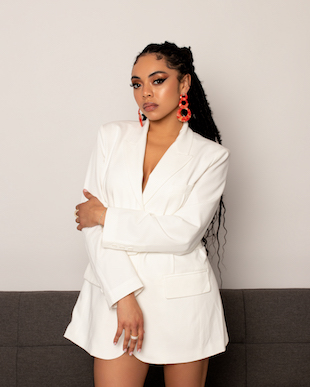