At the age of four, Laurel knew she wanted to be a singer. By seven, she had decided which one.

At 13, she changed her mind, after a friend posted a link to Laura Marling performing 'New Romantic'.

"As soon as I saw it, I thought, 'Forget Britney. I want to be her.' So I got myself a Spanish guitar and started figuring out how to play folk."

Since then, the 19 year old from a tiny town somewhere between Southampton and Portsmouth has discovered that it's her own music that makes her special. Her self-penned and self-produced, cinematic songs hinge on seductive, sultry vocals. Her haunting blend of piano, beats and strings sounds almost otherworldly. Her poetic lyrics feel like a force of nature, recalling relationship break-ups so beautifully you half hope she'll be hurt again. The pop that originally inspired her is there in the hooks and harmonies; the folk she fell in love with remains in the rhythms and in the restraint of her uncluttered songs. But the music is entirely Laurel's, written in her room since spring this year and recorded on simple equipment.

Laurel's journey to find her sound is almost as striking as the songs it took her to. If its stories you're after, she has them in spades. Signed to same company as Ellie Goulding, Rita Ora and Dan Croll on the strength of a single demo, which she uploaded to Soundcloud aged 17, she moved to London last summer to work with a host of A-list writer/producers. She was whisked away to L.A. to discover herself and gain experience writing (her first ever trip to the States, her first ever trip abroad alone), where she recorded every day with the likes of Lester Mendes (Shakira, Nelly Furtado) and Diane Warren wrote her a song.

"Diane was wonderful," says Laurel. "Loopy and barmy with a crazy cat - I love people like that. She said she would find the perfect song for me. It turned out to be called 'Permanent Smile' and it was about being happy all the time. I thought, 'Is that how I really come across?' I had no idea."

That Laurel emerged unfazed and unscathed from experimenting with different genres is due to the fact that she has come full-circle. The self-penned demo that got her signed, 'Next Time', bears many of the hallmarks of how she sounds now. What Laurel learnt along the way sharpened her songwriting and taught her how to produce. It helped her decide what she wanted to do and gave her the confidence to trust her own instincts.

When Laurel asked her label to give her two months to chill in her rented London flat earlier this year, songs started pouring out of her. The first, 'Blue Blood', sent blogs in to a frenzy and hit No.3 on Hype Machine. Thanks to its filmic feel, Laurel was compared to Lana Del Rey, albeit without the artifice, but 'Blue Blood' cast a singular spell. Its arresting "You make me feel again" refrain was both creepy and calming; it wove contrasting tempos and textures in to a song with both substance and a feather light feel; its shiver-summoning vocals were simply sublime. Already, it has over 100,000 plays on Soundcloud.

Laurel has sung since she can remember. "As a child," she says, "no one could shut me up."

Neither of her parents were musical - her mum loved Dolly Parton, her dad listened to Christian rock - but her talent was spotted at school.
She was asked to join the choir, then given the lead. She fronted the school soul band and played concerts. Within weeks of buying a guitar to try to be Laura Marling, she had written her first song.

"It was about flowers and an apple tree," she recalls, grimacing.
"I thought that if you made folk, it had to be about nature."

Four months after getting the guitar, she played her first public gig, at a local pub she wasn't officially allowed in to.

"I had older friends in bands who introduced me to the promoter," says Laurel. "I wore a flowery dress and played songs I'd written that month. I earned a quid for every ticket sold - 15 pounds in all."

The book-loving, poetry-writing 14 year old became a regular on the Southampton scene. She took a few guitar lessons but quit when her teacher asked her to play covers.

"I've never liked playing other people's music," she insists. "I've only learnt three covers in my life - Laura Marling's 'Ghosts' and 'New Romantic' and Ellie Goulding's 'Guns And Horses' - but I've never played them at gigs or posted them online. I suppose I like writing my own songs too much."

Aged 15, Laurel used her school's music room to record her first EP, released under her then performing name Under The Laurels.
She had 100 copies printed up, for which a friend made original artwork, and sold them all an EP launch she organised herself. The following year, she put out a second EP, recorded at a friend's studio.

At 16, she started college in Portsmouth, studying English literature and language, business and music performance. She didn't like the performance part - they preferred her to play covers, rather than original songs - and by then, she was flourishing on Portsmouth's live circuit. The local paper even gave her an award as the city's best solo performer.

A local producer heard Laurel and asked her to sing on some dance tracks. That didn't work out, but while the pair were in the studio, Laurel wrote and recorded 'Next Time', a song about a destructive relationship, inspired by a boyfriend who had just moved abroad.

"There was no big plan," says Laurel. "It was just two chords and some piano parts, with strings put on by the producer. I only stuck it on Soundcloud for my friends to hear. The next thing I knew, Sony were setting me up with a lawyer. I was still at college, desperate to tell my friends what had happened, but not wanting to tempt fate."

The day after Laurel completed her college exams, she came to London, intending to stay for a fortnight. She returned home 18 months later with most of her debut album completed - it is planned for release next year. Since 'Blue Blood', she has posted the song 'Mankind' online. Its sensual, whispered lyrics about birthday sex - "Wine and dine / You're so divine" - sound almost too intimate to be blared from speakers and too emotive to have come from someone so young.

Laurel's first official release was a free download of two new tracks, 'Firebreather' and 'The Desert' released in November '13. Both of these songs were written and produced by Laurel. 'Firebreather' is set to what sounds like a thudding heartbeat, with hypnotic vocals and a high, haunting chorus and luscious lyrics about a man she can't resist.
'The Desert' is a beautiful, brooding piano ballad, its dark, abstract lyrics at odds with Laurel's ethereal voice.

Desperate to play her new songs live - Laurel found a band with whom she played her first official gig at the end of last year, supporting MS MR at Shepherds Bush Empire. More recently, Laurel has performed at the Bardot Club and world famous Troubadour in LA.
Laurel has also supported John Newman on his UK Tour, alongside her own headline London shows; and is headed on the road supporting Dan Croll in March. With further dates planned to confirm in the U.S and the UK festival season ahead, Laurel is also planning an EP release in May whilst she puts the finishing touches to her debut album, expected in 2015. Prepare to discover pop's most bewitching new name. 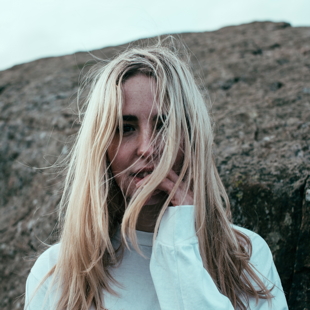