Maybe April is a Country Americana group made up of Katy DuBois (Bishop) and Alaina Stacey. Hailing from Jonesboro, AR, and Chicago, IL, they met in the summer of 2012 at a music industry camp in Nashville, TN. They wrote a song that would later take them to Los Angeles to play at a GRAMMY week event, along with Bonnie Raitt, Kris Kristofferson, Allen Shamblin, Gavin DeGraw, J.D. Souther, Joy Williams from the Civil Wars, and many others. Since then, amongst hundreds of shows, the girls have opened for Brandy Clark and Sarah Jarosz, played Pilgrimage Music Festival and IBMA's Wide Open Bluegrass Festival, and had their video 'Last Time' premiered on CMT.

Maybe April is recognized for their harmonies, original songs, and shared roles as frontwomen, each adding something different from their musical backgrounds to create a unique sound somewhere in between Americana and Country. Their love for each other and their music continues to push them in their endeavors in Nashville, where they have been based since 2013. 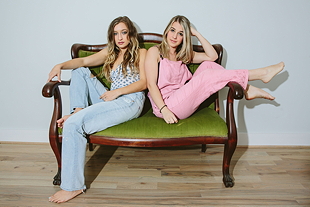