As an only child living in the middle of nowhere in the northern tip of Portugal in a town of ~800, Nana Lourdes, aka Adriana Caldas de Barros, found solace in obsessing over the process of music making. She taught herself how to write, produce, record, and mix while shuffling between her parents’ living room and her late great-grandma’s bedroom. Influenced by music from the early 00’s, such as Britney Spears, Gwen Stefani and that one LeAnn Rimes song, Nana writes songs for all of her celebrity girlfriends.

Closing out 2021 with one final single, “Superstar” follows a series of collaborations with Young Saab, Rome Fortune, and joshua Epithet, as well as praise and support from KCRW, Matt Wilko, and Spotifys playlists including Lorem, anti-pop, and more.

Her latest single is a song “about patience and kindness” that was initially written about “accepting slow love from somebody else.” However, Nana soon realized that she actually wrote a song that serves as a reminder that she needs “to be kinder to herself.” 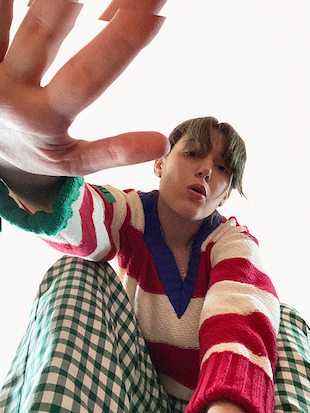