Background:
With over 200 million+ views on YouTube and a hugely impactful musical catalogue, superstar artist Patoranking has enjoyed a massive career with his unique blend of African music and Reggae / Dancehall since he emerged in 2013. The lyrically profound artist who was born in Lagos has made major waves over the years allowing him to create a distinct sound recognized by many. He garnered his own place in the music history when he released hit singles such as 'Alubarika', 'Girlie O' leading to his crossover smash, 'My Woman My Everything' which will become an all time classic in African music.

Patoranking is undeniably one of the most culture shifting visionaries at the forefront of African music. His first album 'God over Everything' debuted at #4 on the Billboard Reggae Charts making him the first African artist to do so. His recently released second album 'Wilmer' also debuted at #5 on the same charts.

Eager to show his true artistry and diversity while staying true to his blueprint for success, Patoranking is known for his compelling visuals which won him the Sound City Video of the year award for his single 'Heal The World' earlier this year. After completing a successful tour with Ms Lauryn Hill last year across North America and performing at the Barclays Center with her a special guest, Patoranking is set to embark on his second Europe Tour in February 2020.

Achievements.
In a breakout year marked with performances in Mauritius, New York, Tanzania, and London-including performing alongside Tinashe at Notting Hill Carnival, Patoranking won Nigeria's most prestigious music award, The Next Rated Award at the 2014 Headies Awards, and the 'Best New Act of The Year' at the City People Entertainment Awards.

In 2016 Patoranking brought in the year being announced as one of the judges for the season debut of internationally acclaimed reality singing competition 'The Voice Nigeria'. Patoranking continued to dominate the charts with the release of his debut album 'God Over Everything' that featured top Afrobeats artists such as Wizkid, Olamide, Phyno, and more.
Just 11 days after the release of his album, the debut reached #4 on the Billboard charts making him the first Nigerian artist to make Billboard's Reggae Album Chart. Shortly after, Patoranking won MTV Africa's 'Song of the Year' award for his hit single 'My Woman, My Everything' featuring Wande Coal.

To date, Patoranking has been nominated for over 30 awards - including 'Male Artist of the Year' and 'Best Dancehall Artist' - taking home more than 20 awards for those categories. 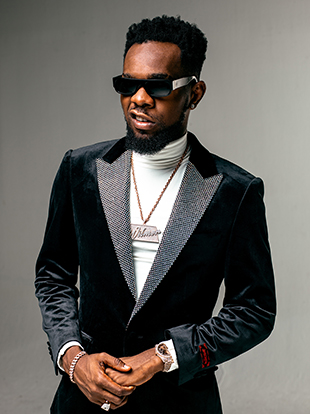