'Womb' is the newest offering from Purity Ring of Edmonton, Canada, and their third album on 4AD. Once again, Megan James and Corin Roddick wrote, recorded, produced, and mixed the album, infusing their care and intention into every element.

'Womb' chronicles a quest for comfort, the search for a resting place. The striking vulnerability of "ruby insides" - "If I could, I would let you see through me" - charts a course that's both intensely personal and deeply connected to those close to us, our kin whether by nature or nurture. As the ground shifts beneath their feet, 'Womb's characters help one another face death, despair, and world-altering discovery with resilience and grace. For all the terrain it encompasses, 'Womb's quest culminates in "stardew", a glittering, transcendent invitation to "just be where you are" - to experience the kind of powerful peace that can only be found by truly coming home. 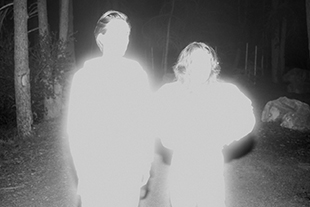