Delivering the brash honesty of rap music, with her unique blend of soul and R&B spirit, Ray BLK weaves between genre boundaries borrowing the elements she requires to reach her goals. "I feel proud when my music connects with people," says the 22-year-old from Catford, South London.

Ray's first experiences of music came at a very early age, when she recalls dancing to Missy Elliott and Timbaland on MTV Bass at the age of seven "From that age I thought, this is what I want to do," she recalls. "I remember singing and dancing along to all of it and thinking 'Oh my god, I'd love to be doing this.'"

From the age of ten, Ray was already setting her dream in motion, filling her school notebooks with original song lyrics, prompting teachers to put her on a gifted and talented music programme. Despite her early experiments with music, it wasn't until her final year of studying English Literature at university that she decided she wanted to share her music with the world. Delving into a catalogue of rough recordings she'd been making since the age of sixteen, she picked out her strongest songs and began scouring YouTube for instrumentals. The songs told the tale of a broken hearted girl who grew to hate men, and reminded her of a character from her studies, hence she titled it 'Havisham', based on the Dickensian spinster from 'Great Expectations'.

Lyrically, Ray's music is very candid; she isn't trying to gloss over situations and paint her life as a fairytale. "I say it how it is," Ray admits. "The music that I love is the stuff that gives it to you raw. Then you can really connect with it. I listen predominantly to rap music, which is like that all the time, so I think the influences come from there. It's important to stand for something, to have my music stand for something," says Ray. "So these are things that are really important to me." The surname BLK that she's adopted, is a constant reminder of her values: Building Living Knowing.

At the end of last year Ray released '50/50' a track that would open up a new chapter in her career. Premiering on I-D Magazine with a visual depicting BLK and her all-girl mob hanging out in her native Catford, from the streets to the salon, as she tells the tale of a rocky relationship with a drug dealer with commitment issues. The Aston Rudi - produced track would snowball in popularity, securing A-List spots with 1Xtra and Rinse FM, record of the week from Huw Stephens, spins from Annie Mac, Julie Adenuga and Toddla T as well as the support of media platforms such as Complex, Noisey, HypeTrak and MTV. The attention came as a surprise: "I'm really happy with how well the track has been received. I definitely didn't expect it to be noticed as much as it has been, particularly since I put it out on my own channel."

"This new body of work feels so different," says Ray.
While she still appreciates her former project, she's since found her sound which lies in a space between London's forward-thinking electronic production and the Bad Boy Records remixes that she grew up on.
"Beforehand I was using found instrumentals, so none of them were tailored to me," she explains. "Now I'm blessed to be working with people to actually create something that feels like me."

Ray BLK intends to keep the ball rolling, now putting her focus on music full time. She intends to be braver creatively moving forward, off the success of '50/50' and to continue to develop her live show.
"The goal is to make people feel something," she explains. "I love doing shows. I'm so scared before every single one, but I love every single one. I want to do more shows in front of bigger audiences and connect with more people." 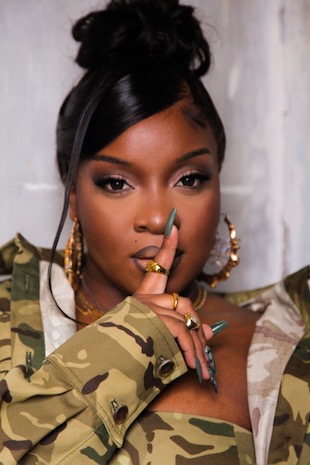