Waving farewell to the Eighties: it was biggest pop kick there'd been in, ooh, ten years. During that godforsaken, musically atrocious decade, it was them and us. We hadn't got a prayer. Our stuff didn't register in corporate demographic terms, it was too vague and indefinable. And it didn't register in the charts. There would be the occasional triumph, as the The Smiths, the Bunnymen or the Mary Chain made a lightning raid on the Top 20, only to limp back to obscurity the following week.

So, come the tail end of 1989, there was a mood of battered, hopeless optimism. As we took our huddled flight into the Nineties, a bolt from nowhere, from Oxford, overturned the inherent pessimism in that optimism and gave us something to believe in. Ride had tunes, noise, looks, style, confidence, everything. And they had youth: their two guitar-playing singers Mark Gardener and Andy Bell were both just 19, as was drummer Laurence 'Loz' Colbert. Stephen Queralt, the bassist, was an oldster at 21. They'd come together on a foundation course at North Oxford Art College and had been playing around the Thames Valley area for less than a year. Already, though, they looked and sounded supreme, like they'd been born with their guitars strapped on and had been jamming together ever since. Justifiably mistrusting the A&R scramble that ensued, they instead signed up where they felt they belonged, Alan McGee's Creation Records.

The cover of the 'Ride EP', released in January 1990, showed a bed of roses. The symbolism there, and in the first words on the first track was lost on nobody. A new decade was rung in with a possibility that guitars gone into overload might become pop music - as in actually popular, in the charts and stuff. "Take me for a Ride away from places we have known," Mark crooned on 'Chelsea Girl'... implicit in the song's delirious melody was a reaching for new heights, a belief in better things to come. It went to #71. In those days, for an independently released debut, with next to no radio airplay, this was a result. Creation had never slipped inside the Top 75 before. There hadn't been such a buzz about a UK group in aeons. Ride were hungry to perform, and when they did, they blew everyone away.

It all kind of centred on Loz. He was a hurricane behind the drums, you'd just see this blur of sticks and hair. Stage right was Steve, staring intently downwards, snapping the groove tightly down. Off to the left was Andy, in his own world. And right up front you had Mark, thrashing wildly at the six strings, but cooing like an angel into the mic, the Ride duality in one body.

By April, they'd charged up enough audiences for there to be real anticipation for their next record - the 'Play EP' - and on that buzz alone, it went in at - unthinkable! - #32. Bands just didn't happen that quick. Even the Roses and the Mondays and the Scream, who'd all been going for years, had only just started to hit. "It took Primal Scream six years to become a genius band," gushed McGee at the time.
"Ride have managed it in six months." Eager anticipation now shifted onto Ride's debut album.

Preceding it by a month came the 'Fall EP', the band's third, with a foreboding atmosphere about it that those hooked on the noise/pop pleasures of 'Chelsea Girl' and 'Like A Daydream' might not have foreseen. After the Smithsian daffodils last time out, the sleeve showed penguins freezing to buggery in the snow. The four tracks were headed up by their darkest composition so far, 'Dreams Burn Down'. For all the uncompromised storm clouds, 'Fall' near as goddammit matched the success of 'Play' at #34.

When 'Nowhere' dropped in October '90, it not only became Creation's first ever Top 75 album, but shot in at #11, to blanket critical appreciation. It was angst, but it was ecstatic, as witnessed by Bell's awesome closing track, 'Vapour Trail', its brooding bassline/cello finale leading up and away into infinity. A fitting climax to the finest debut album of 1990. The rest of the world was listening.

In Japan, Australia and America, the 'Smile' mini-album was released, compiling the eight killer tracks from those first two EPs. Press excitement exploded around the globe. The band did an extensive European tour in the Winter of '90, followed by a debut trip to Japan. They landed at Osaka airport to be greeted by 200 girls all clutching bunches of daffodils (how did they do that - in December?!).

Ride were pop stars. Where so many of their contemporaries had failed to stretch their fame beyond the British coastline, Ride were truly a global success. The 4000 tickets for the Japanese tour sold out in 12 minutes, and 'Nowhere' went Top 10 there. 'Vapour Trail' from the album was also a huge US radio hit. As people, the band's time wasn't their own anymore.

In March '91, Ride Mark 1 released the 'Today Forever EP', with a killer shark's jaws warning off competitors from the sleeve and the mesmerizing lead tune, 'Unfamiliar', doing much the same in music. It leapt into the singles chart at #14, a career best, but already they were planning Ride Mark 2, to leave their peers for dust. "All that stuff just means we do something different next time," Queralt informed Select magazine's David Cavanagh at the time. "We're now very aware of what we don't want to sound like."

In 15 months, Ride had released two albums' worth of material. For the rest of '91, they played live all over the world. They toured the US for the first time, nipped down to Australia and back up for a second visit to Japan. Headlining the one-off Slough Festival in July, they aired some of their work-in-progress.

Withdrawing to rural Chipping Norton with Alan Moulder at the production controls, they recorded some 25 tracks, from which the ten great ones formed 'Going Blank Again'. It was an astonishing LP that bore no trace of "difficult second album" syndrome, soaring off boldly beyond anything that they, or any of their piddling peers, had achieved thus far. Its title sarcastically swiped at critics who alleged that Ride were vacant, had nothing to say. And 'Leave Them All Behind', which trailered it in February '92, was as eloquent a mission statement as you could've wished for.

Without giving any ground (hell, by stealing more!), 'Leave Them All Behind' went in at #9 (Creation's first ever Top 10 hit). In March, the LP went further, racing in at #5.

These were glory days for Ride. They'd very effectively legged it clear of the pack that had formed around them, and scaled the industry ladder to the point where, following an exhaustive and exhausting world tour - their second in as many years, they would play one slot below Loz's all-time heroes Public Enemy at Reading '92. If you're holding the full-tilt box-set version of this 'Best Of', you can hear for yourself just how mind-meltingly brilliant they were live around this time.

The four of them spent much of that year getting fired up. They ventured out for the occasional live show including the spectacular 'Daytripper' weekend, where they co-headlined the Brighton Centre and the Blackpool Empress Ballroom with The Charlatans - Ride closing the show down South with the bill flipped on The Golden Mile. And once their songs were close to ready, they went back to Oxford with producer George Drakoulias (Black Crowes, Jayhawks), to hone and re-arrange the next "difficult" album, their third.

Pre-production over, George had to leave to take the helm of Primal Scream's 'Give Out But Don't Give Up', but there was a producer lined up - John Leckie, who could reel off a litany of classics he'd worked on, from John Lennon's 'Plastic Ono Band' and 'Meddle' by Pink Floyd, right through to 'The Stone Roses'. Initially bound tight as an insular band / gang, Ride's gates had blown open and the world around them came flooding in. It was like swapping black / white for Technicolor, everyday life for hyperreality, With its opening minute of chirruping / chattering, this was not the stuff of radio dreams. Having been AWOL during the first tremors of Britpop (Suede / Auteurs, and in January, 'Supersonic' by Oasis), Ride came back as a ball of confusion. The single stalled at #38, but it set the stage for the main feature, 'Carnival Of Light', unleashed in June.

The fish-eye sleeve shot of the band spoke volumes to fans of lysergic history. The grungy cover of 'How Does It Feel To Feel?' by The Creation (the '60s garage-psych band who'd given McGee's label its name) harked back to familiar sounds, but for the rest, Ride strode boldly forward from behind their habitual wall of feedback and, as they'd promised before, just let it flow.

At Christmas, the band played as un-billed support to Oasis at their biggest gig to date, the 5,000-capacity Brighton Centre. Without realising at the time, this was to be the band's last UK show, the only dates that followed in 1995 were a fourth tour of Japan and one festival in Spain. However one Noel Gallagher watched the whole Ride set from the mixing desk at the back of the hall, commenting at the end "It's just as well we're fucking good".

With wives, babies and new homes they'd barely had time to decorate yet, the four now had lives of their own. They'd been at this for five years, and while they'd all grown up together, they'd developed their own domestic agendas away from the gang ethos.

It must've been a bastard to know what to do next. They each had their own ideas. It's a miracle that they came up with anything at all, but what they recorded through 1995 was 'Tarantula', another quantum leap forward. However, by the time it was released in March '96 the band had announced that they had effectively split up. To hear what a high Ride flew out on, how far they'd travelled since 'Chelsea Girl', 'Leave Them All Behind', even 'Birdman', just cue up 'Black Night Crash': a blast of bad-ass blues, based on the car-smash voyeurism of JG Ballard's 'Crash'.
Despite the lack of gigs, the album still charted at #21.

2001 saw the release of the re-mastered catalogue albums from the original analogue tapes, 'OX4 - The Best Of Ride'; a timely reminder of just how brilliant, how different, how influential, and how fundamental they were to what has since followed. Alongside this was a 3xCD box set, featuring 'OX4' alongside an album of previously unreleased material, 'Firing Blanks', and a live album of their Reading Festival show in August 92. 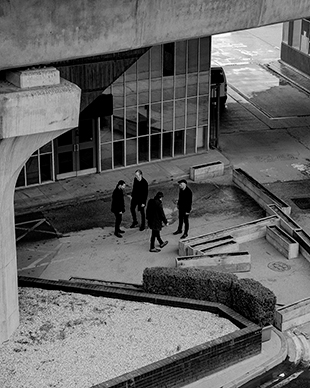