The music recorded by Ernest Greene as Washed Out has been nothing if not dreamy, but for his second full-length, he's taken the idea of letting your mind wander to another state a huge leap further. On 'Paracosm', due out Aug. 13 on Sub Pop, the Georgia-based musician explores the album's namesake phenomenon, where people create detailed imaginary worlds. The concept has been used to describe fantasy lands like Tolkien's 'Middle Earth' and C.S. Lewis' 'Narnia', and it's at the heart of the 2004 documentary 'In The Realms Of The Unreal' about outsider artist Henry Darger.

The idea of escaping is all over 'Paracosm's lyrics, and it's also the main thrust behind the music, which finds Greene distancing himself from the modes and methods that informed Washed Out's previous recordings.
No, he hasn't thrown away his computer or synths, but Greene made a conscious decision to expand his sonic palette, which resulted in the employment of more than 50 different instruments, the most significant of which turned out to be old keyboards like the Mellotron, Chamberlin, Novatron, and Optigan. Designed during the middle of last century and made up of prerecorded sounds with individual notes sampled for each key of the chromatic scale (the flute sound in The Beatles' 'Strawberry Fields Forever' is a well-known example of the Mellotron in action), these relics allowed Greene to use his sampling expertise while also offering the flexibility to explore new creative avenues.

"I've grown as a songwriter to the point where I want to have more involved arrangements, and that's really hard to do with sampling," says Greene. "These machines were kind of a happy medium: The sounds have a very worn, distressed quality about them, much like an old sample. But they also offer much more flexibility because they're playable. Pretty much all the keyboard sounds, and strings and harps and vibraphones all of that comes from these old machines."

Following two years on the road in support of the critically acclaimed 'Within And Without' which itself followed the lauded 'Life Of Leisure' EP, led by the otherworldly magic of 'Feel It All Around,' which can still be heard during 'Portlandia's opening credits he and his wife, Blair (who plays in the Washed Out live band), decided to relocate from the big-city hubbub of Atlanta to a house on the outskirts of Athens.
Working daily for nearly six months, it was easy for Greene to begin shutting out the real world in favor of an alternate universe of his own making, with the rural setting acting as a prime catalyst.

"Subconsciously that's a big inspiration for some of the sounds," says Greene, who completed about two-thirds of the record in Athens before finishing up in Atlanta with Ben H. Allen (Animal Collective, Deerhunter, Gnarls Barkley), who also worked on 'Within And Without'.
"While the last record was very minimal, very monochromatic in a way, I knew from the beginning I wanted this record to be optimistic, very much a daytime-sounding album. I think the last record felt more nocturnal in some ways. This one I just imagined being outside, surrounded by a beautiful, natural environment."

Listeners will be immediately struck by 'Paracosm's seamless melding of organic and synthetic sounds, which are related to Washed Out's past but also find Greene redefining his trademark dreaminess. (The songs themselves are also seamless, connected in such a way that they tell a linear sonic story.) The live drums, bass, and guitar recorded at Allen's Maze Studios help take the new material to another level specifically a place where, despite the vintage instruments and Greene's throwback tendencies, everything feels like it was made right here and now. It also has a more human quality to it than most people are probably used to hearing on an electronic album.
Take, for instance, the sunny, laid-back groove of the appropriately titled 'Great Escape' ("All I need is the simple life / make believe the world has vanished around us") and first single 'It All Feels Right,' which is as wonderfully hypnotic as anything in Washed Out's discography yet uses an almost tropical feel to get there.

"'It All Feels Right' was one of the first songs that I started for 'Paracosm' ," says Greene. "It's my favorite song on the album because it's the closest to the vision I had when I started. 'Paracosm' is the first work I've done where I knew from the beginning what I wanted it to sound like."

Elsewhere, amidst the sound of kids playing and birds chirping, 'Paracosm' offers plenty of opportunities to sing along, including with the beautifully bent 'Don't Give Up,' the jangle-squiggle jam 'All I Know' (which sounds like Smiths-era Johnny Marr collaborating with Passion Pit), and the romantic-pop tune 'Falling Back.' Regardless of where you turn, the album is packed with beautiful moments, the most moving of which can be heard while Greene gets his shoegaze on during the Cocteau Twins-esque 'Weightless' and album closer 'All Over Now.'

With its gorgeous execution and uplifting attitude, 'Paracosm' is primed to be this year's summer record that gets you through the winter. And it promises to do what its name suggests: Take listeners to another, better, world.

"Washed Out have created an album that inhabits you and you inhabit it."
Alternative Press

"The perfect record for the lazy weeks of summer - a sun-dappled, intricately layered, indie pop beauty."
[#2 / "Must List"] - Entertainment Weekly

"Harplike arpeggios herald the beginning of the title track like the launch of a Technicolor reverie, but the ninesong LP's dreamiest tune is 'All I Know,' a nostalgic stunner that glows like a jar of fireflies."
Rolling Stone

"It's a realm of leisurely melodies and keyboard chords that wash in and drift away, of calm vocal harmonies and burbling electronics, of lavishly blended acoustic and electronic instruments and echoes of reassuring pop from past eras... 'Paracosm' sounds warmer, more enveloping; precisely because it's so much more spacious, it's cozier."
New York Times 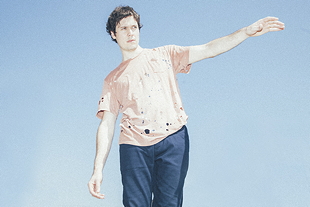