Baby FuzZ, the alter ego of musical polymath Sterling Fox, is arguably one of the most interesting new acts in music. In 2017, Fox was peaking as one of the more successful songwriters in the pop music world, having written with the likes of Madonna, Max Martin, Lana Del Rey, and others. Abruptly, and shortly after the Trump election, he quit collaborative writing, moved to Canada, and disappeared from the music world completely. After a year of isolation in Montreal, Fox returned to the US and reemerged as Baby FuzZ, a bizarre paradigm of audiovisual glam rock and normcore. Throughout 2018, FuzZ dropped a myriad of singles and self produced music videos, gathering the attention of a small but loyal online cult fanbase. Described as “one of the most slept on acts in music” by Hillydilly, Baby FuzZ unapologetically jumps all over the genre map, with songs ranging from folk ballads to punk anthems and everything in between. As diverse as the music is, the lyrics are a singular and hyper self aware narrative with strong political and social undertones. In 2019, Baby FuzZ released his debut album Plastic Paradise independently and embarked on a 100 date diy tour around the US.

You get the sense that Baby FuzZ was just getting warmed up in 2019, with Plastic Paradise coming off as a death rattle of a previous life of overthought pop demos that had finally eaten itself alive with a sense of ennui. But if the debut was his first contact, 2020's new followup Welcome To The Future is sure to be Baby FuzZ's full blown alien invasion. It's a wild concept album amazingly relevant to a dystopian America currently in the throes of a pandemic. The bulk of the album was made in quarantine in Los Angeles, and to be sure, it's an absolutely expansive yet claustrophobic opus of bedroom glam rock. Ranging from the shameless cock rock anthem "Before Our Time" featuring LP, to a faux incel mariachi jam called "Weekend Blues" to the ambient saxophone ballad "Acid Night" about dropping acid at a Dodgers game, Welcome To The Future is astoundingly diverse. Lyrically, it's an absolute masterclass in oddity, with FuzZ writing at times from the point of view of an orca, suburbanites named Kevin and Karen, and a cellphone. All in all, it's an immediate and compelling album with heavy doses of conservationism, disguised symbolism, and good old fashioned American absurdity.

Hillydilly - “The most slept on new act in music.”

EARMILK - “ …grabs us by the throat and tugs ferociously at our heartstrings.” 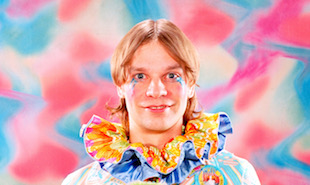