The wild beats of Angolan Kuduro music has been big in Lisbon clubs since the late 90s and Buraka Som Sistema - AKA Branko, Riot, Conductor, Kalaf and Blaya - have fused it with 21st century electronics to create a whole new sound. Now this electro ghettotech take on their favourite South West African music has is quickening and corrupting dancefloors all over the world on the basis of an EP with sounds not many have heard before. This was only the beginning, as their interest in the sounds of the tropical ghettos kept informing their sound and pushing it into new directions, inspiring them to create two full length albums - the breakthrough 'Black Diamond' (2009) that got the world mimicking Luanda dance moves and 'Komba' (2011), the sophomore long player where their sound takes a bold new step into new directions - as well as several singles, an impressive number of remixes and many collaborations with artists like MIA, Petty, Pongolove and Roses Gabor, among others.

Branko and Riot began making music together in their teens, but the core of Buraka Som Sistema formed when the two began working with Angolan producer, Conductor, who brought along an extensive knowledge of Kuduro music to the equation, Angolan MC Kalaf, who translates his vast knowledge of music and culture into the right words at the right time with his signature deep voice and Brazilian dancer-turned-MC Blaya, whose provocative stage antics earned her a permanent spot on the group.
The five draw influences from the music of their youth and culture, fusing it with the inspiration taken from music genres as diverse as techno, drum'n'bass, hip hop and dance music, mixed with all sorts of exciting tropical-flavored music.

Join Buraka Som Sistema in their never-ending celebration of life, as they cross borders and genres to bring you wild, untameable rhythms, urging the listeners to drop their cares and run towards the nearest dance floor.

"The concept of digging was introduced in the late '90s. It s basically going around basements and record collections in search of that perfect loop that you can sample and use in your own records. Instead of searching for old 12 vinyl, our search is based on what is going on in the world right now" Branko, Buraka Som Sistema

Buraka Som Sistema, the hugely successful international band best known for their unique ability to bring an experimental mix of music from all corners of the globe to the clubs, announce 'Off The Beaten Track' a 60 minute documentary to be premiered in September and on a five date European tour.

'Off The Beaten Track' is the documentary that tells the incredible story of four unlikely musicians, as they travel to Luanda, Caracas, London and the Lisbon suburb of Amadora to show how these cities, as well as their sounds, people, colours and movement helped to create the phenomenon that is Buraka Som Sistema. With the full support of Red Bull Music Academy and the talented illustration work of artist Kate Moross, Lisbon's most unlikely band venture on a trip around the world and back to the studio, as they bring their experiences home to start laying down the first beats of the next Buraka album in London.

Branko, Riot, Kalaf and Conductor - four completely different guys from totally different backgrounds - took the furious rhythms of Angolan kuduro, mixed it with techno, grime and whatever else was handy and created critically acclaimed albums such as 2009 s 'Black Diamond' and 2011s 'Komba'. Enjoying support from the likes of Diplo, M.I.A., Santigold and Skream, who also appear in the documentary, Buraka share their intimate experiences over the past year.

Directed by Joao Pedro Moreira who directed videos for hits 'Hangover (BaBaBa)' and 'Sound of Kuduro', 'Off The Beaten Track' will be screened at forthcoming dates before the legendary Buraka Som Sistema full live show. 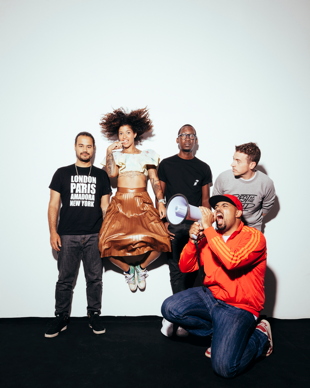