Calva Louise are a sonic boom waiting to happen - Jess Eastwood (guitar/vocals), Ben Parker (drums) and Alizon Taho (bass) have created a genre defying burst of energy and imagination that join the dots between indie, punk rock and electronica. Hailing from Venezuela, New Zealand and France, the trio found each other in London back in 2017 and got to work developing a sound that is entirely their own, bending eye watering aggression with stadium ready anthems via ambitious songwriting and outright hooks. It's telling that a band comprised of such eclectic nationalities are influenced as much by latin pop as they are Queens of the Stone Age.

Over the past 18 months they have continued to build fans with a string of critically acclaimed releases and a relentless touring schedule, performing sold out concerts across the UK and EU and support slots with the likes of Razorlight, The Blinders and Albert Hamond Junior (who chose them as his artist of 2018 for an article in talkhouse.com). Debut album 'Rhinoceros' was released with tastemaker label Modern Sky in 2018 with latest Tarrek Musa (Spring King, Circa Waves, The Big Moon) produced EP 'Interlude' for the Boardline Unsettled following in 2019. The latter was described as a "caustic piece of cyber punk" by Clash and "...space, time and future rolled up in a big ball of fuzzy grunge pop... with stunning vocals so huge they make Wolf Alice sound lo-fi" by Louder Than War. Singles from both records found heavy rotation across BBC Radio 1 (Annie Mac, Huw Stephens, Jack Saunders and Abbie McCarthy), BBC 6 Music (Lauren Laverne, Steve Lamacq, Shaun Keaveny and the legendary Iggy Pop) and saw the band record sessions at BBC Maida Vale Studios and Radio X.

2020 will see the band release two EP's and begin work on their second studio album. This spring they will embark on a huge sold out EU/UK tour with Highly Suspect before their own run of headline shows and festival appearances throughout the summer. 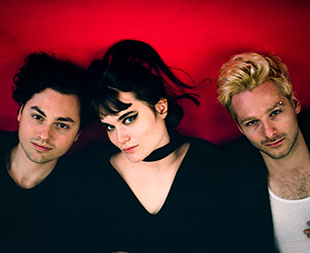