Reeves Gabrels & His Imaginary Fr13nds are an American power trio fronted by "one of the most daring rock-guitar improvisers since Jimi Hendrix" whose singing shows he's truly listened to those with whom he's best known for playing with: David Bowie and Robert Smith. Each song is its own adventure: originals with sharp smart lyrics and well-made melodies set in rich sonic landscapes, rock and blues covers re-imagined in sometimes-wild ways, plus co-written gems such as 'Bus Stop' (Bowie / Gabrels) and 'Yesterday's Gone' (Gabrels / Smith). A lyric says it all: "let me bend your ear, and your mind a little too."

The band are: Reeves Gabrels on guitar & vocals, Kevin Hornback on bass, Jeff Brown on drums. 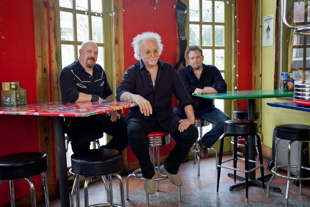