As host of the coveted Capital Dance Evening Show and the Capital Weekender, presenting a total of six shows a week, Coco Cole is one of the most prominent voices in dance music on UK radio.

Following a 7 year career within radio behemoth Global, she was was asked in October 2020 to launch and front the brand new dance music station, Capital Dance, alongside respected broadcaster Mistajam.

Fuelled by championing emerging talent, Coco ran a respected mix series, promoting talents like HAAi, Avalon Emerson and Ross From Friends in the early stages of their careers.

It was in 2016 that Coco first launched the Capital Weekender on Capital FM bringing quality club music for the first time to the hit music station with 8 million listeners.

In the same year, after impressing Martin Solveig during a b2b set on air, she was asked by him to join as a resident for 3 seasons for his hugely successful ‘My House’ parties at Pacha in Ibiza.

This is where Coco learnt the essential skill of the warm-up act. Nurtured by playing to completely new and varied crowds week in week out at one of the most revered clubbing destinations in the world.

As the “My House” resident, Coco would also play the pre- parties at the historical Ibiza venue Cafe Mambo, often filling in for Martin as the headline slot. She also travelled with him as his trusted resident playing European festivals like Tomorrowland and ADE.

In doing so, Coco earned a nomination as “Best Resident DJ” for the 2017 DJ Mag Best of British awards, running alongside DJ Harvey of Pikes and Terry Francis of Fabric.

She also held an enviable pre-covid residency at XOYO’s Pleasurehood, laying down 5 hour sets on Saturday nights in the heart of London nightlife.

The label has seen support and plays from the likes of The Blessed Madonna, Man Power, Elliott Adamson, ABSOLUTE., Medlar and DJ Boring.

Running a label was her entry point into the music industry in 2012 before becoming a broadcaster. Coco was a core member of the small team at the then independent Black Butter Records. There she launched and released such now internationally acclaimed artists as Rudimental, Gorgon City and Clean Bandit. Coco garnered the role after impressing the founders with her ear for talent as she was already supporting soon to be breakthrough artists Kidnap Kid + Karma Kid on her university radio show.

Coco is also an in-demand voiceover artist, fronting TV, radio + internet campaigns for companies such as Fujifilm, Sainsbury’s and Huawei. 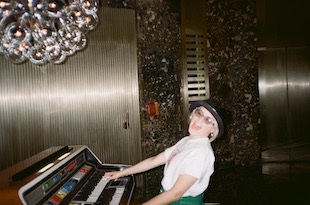