From a small bedroom studio in South London, to the most prestigious recording spaces across the world, the story of Da Beatfreakz is one of consistently beating the odds, even when it seemed impossible.

Boasting over 350 million YouTube views, numerous platinum-selling singles and an envious array of credits from the likes of Chris Brown, Giggs, Sean Paul, Ellie Goulding, Usher and countless others, it's safe to say that the songwriting and production duo have earned themselves a break. But, now - as they enjoy another impressive run of hit singles featuring the cream of homegrown British talent - it feels as though they're only just getting started.

It wasn't always like this, though. The duo, comprised of brothers Obi 'O1' and Uche 'U1' Ebele, came from much humble beginnings. Before they would rack up number one singles across the world, they would huddle into a small bedroom in their South London home - a space they made into a makeshift studio - where soon-to-be stars such as Ashley 'Bashy' Thomas and Tinie Tempah would all flock hoping to record some of their earliest work.

Growing up in a Nigerian household, it was the sounds of Fela Kuti and Shina Peters that would reverberate around the family home, forming the basis of their early musical education - an education further reinforced by their father's reputable career as a music journalist. As they grew, the two siblings would enroll in their church choir - at the request of their mother - and it was here they would get their first taste of the stage, leaving a lasting impression.

Fast forward to their teenage years and it was Garage pioneers So Solid Crew and a young Dizzee Rascal that inspired them to take their first steps into music. "The moment we heard Dizzee Rascal; that was the moment," Uche recalls. "That's what made us want to rap." But there was something missing; the urge to produce was pulling them closer. "It only lasted for a matter of time before we decided to put that to the side and focus on the production fully."

But, back then - in the early 00s - being a producer wasn't cheap. In order to purchase vital equipment and chase their dream, the duo would need funds. "We're not proud of it, but we did everything to get money those times," they recall. "We were working in McDonalds, doing paper rounds, doing everything in order to flip that money and pay for the equipment."

As they delved into making money by illegitimate means, things started to worsen in their local area. After a family member was murdered and a close friend was stabbed in front of their eyes, a drastic change was needed. "Our friend got stabbed in his stomach and his whole intestines fell out. After we saw that, that was the moment we decided that we have to get out."

Much to their surprise, after messaging American hip hop production outfit Cool & Dre on a whim one evening - a collective known for their high-profile collaborations with the likes of Lil Wayne and The Game - to their disbelief, the South London duo were soon invited to Miami to work. This was the opportunity they'd been waiting for, and they weren't going to take it lightly. "To get out of where we came from - with everything that was going on at the time - and just go somewhere completely different, it was amazing man."

Fast forward a few months and it wasn't long before opportunity would knock once again, this time with another legendary production outfit, The Trak Starz - famous for their work with the likes of Nelly, Ludacris and even Britney Spears. The producers offered the duo a deal to work with them over in St. Louis. "We lived with them in their house," they explained. "We were working with Chingy, Nelly, Jermaine Dupri; it was incredible man."

After almost a decade, though, Obi and Uche were ready to return home.
Equipped with some newfound knowledge, the pair set about reuniting with some of their former peers, while also taking the initiative to venture further afield. "Even when we came back to the UK, we never just stayed in London - we travelled to France, we made hits in Italy, Germany, Russia; we tried our best to bridge the gap between artists from England and everywhere else."

Since returning back to the UK, the duo have been making serious waves.
Recent collaborations with the likes of Giggs, Shakka and Mr. Eazi, have all racked up millions of views and further cemented the duo as one of the most consistent production outfits to emerge out of the UK in recent times.

With that, the pair aren't looking to stop anytime soon. As they continue to reach new heights, their ambitions are only emboldened. But commercial success isn't the only thing in their sights - they're now looking to inspire real change. "If we can only touch one or two people, that's okay with us. It's a vicious cycle out there. We want to try and change that for the kids coming up, just to show them, 'Look, you can make it. We did it, so can you!'"

With a slew of unreleased collabs and a highly anticipated forthcoming project in the works, the future looks bright for Da Beatfreakz.
After a lifetime of hard work, persistence and beating the odds, it feels like no feat is too great.

"We want to take this to the top," they admit. "We don't see why anybody from the UK or Africa can't be number one... that's what we're going to get to." 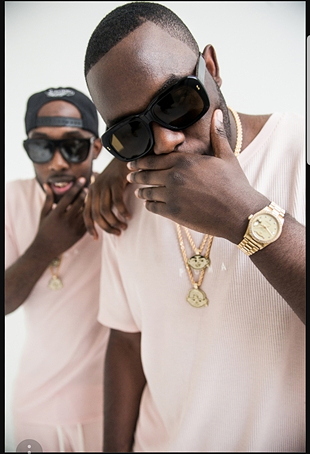