Pop does have a habit of taking us by surprise, but back in the spring of 1995 you'd have got some decent odds on the chances of three naked men in a bath turning out to be one of the few British bands to escape the 20th Century with their dignity intact.

With hindsight it would have been worth a flutter. Gaz Goombes, Mick Quinn and Danny Goffey, along with longterm collaborator Rob Coombes who officially joined the lineup in 2002, went on to score an unbroken run of five Top 10 albums (six, if you include a greatest hits), among them three platinum sellers generating millions of worldwide sales spawning ten Top 20 singles. The Brit and Ivor Novello - winning Oxford outfit may have made their name through the weekly rock mags but their faces made just as much sense in the pages of Smash Hits or on the cover of The Face; in the thirteen years between their first album and their last they were chased down the street by fans in Japan, scored the biggest-selling debut for Parlophone since The Beatles, helicoptered into Glastonbury, turned down a Calvin Klein pants ad, toured the world on their own and supported everyone from Blur and Arctic Monkeys to Foo Fighters, Radiohead and The Cure.

None of which would have seemed likely to the kids from Wheatley Park Comprehensive who formed a shoegaze band called The Jennifers in 1991, gigged around Oxford for a few months then saw the whole thing get wildly out of hand when they signed to Suede's record label, Nude. In an interview at the time, Danny from the band was asked if all bands should start off during their late teens. His response: "That should be the END of their careers."

It nearly was, to be fair. The Jennifers' one and only single sank without a trace. "I suggested they go off and find a new direction," that first label boss later recalled. That new direction - not a bad one, as it turned out - involved The Jennifers splitting, Gaz and Danny from the band roping in Mick, who they knew from a kitchen job, a new band called Theodore Supergrass being formed, a visit to a record store leading to a chance encounter with the man who'd go on to produce their music for many years, the word 'Theodore' being unceremoniously jettisoned, and Supergrass striking a deal with Radiohead's management company.

Independently released debut single 'Caught By The Fuzz' was crowned Single Of The Week in both NME and Melody Maker, and after signing with Parlophone the ball kept rolling: to the Top 20 with Mansize Rooster, the Top 10 with Lenny, and the Top 3 with 'Alright', a single only disqualified from counting as era-defining on account of the fact that even in 2019 the song, which has a habit of resurfacing every summer, has never really gone away. As college radio buzz grew deafening in the States the band released through Sub Pop; in 1995 Supergrass's Mercury-nominated debut album 'I Should Coco' hit the charts at Number 3, rose to Number One in the week following Glastonbury and ended up shifting over 500,000 copies in the UK and a million worldwide.

While Supergrass's music was bursting with enough personality on its own - a frantic explosion of energy, humour, hooks, and sonic references to everyone from The Beatles to Roxy Music - the band's visuals, including videos directed by Danny's brother Nic Goffey, were as eccentric and quintessentially British as elements of the trio's collective, pre-band CV: dinner lady, labourer, Harvester restaurant employee. Quickly, Supergrass proved masters of pulling off the delicate balancing act between being cartoonish without ever becoming caricatured. At one point there was a close encounter with Steven Spielberg in which the director attempted, unsuccessfully, to persuade the band that they could be the new Monkees. (Supergrass weren't prudes, just highly selective: 'Alright' did make it onto the 'Clueless' soundtrack.)

The band toured Europe, Japan and the US as their songwriting and sound evolved and Supergrass's all wheat, no chaff songs took a nod towards mod, glam, psychedelia and blues: a controlled shambles, all wrapped in rich wit and lyrical perceptiveness. 1997's 'In It For The Money' spawned hit singles 'Going Out', 'Richard III' and 'Sun Hits The Sky' and was later voted one of the greatest albums of all time by readers of Q magazine; its successor, 1999's Supergrass, gave the world 'Pumping On Your Stereo' and 'Moving' - it was deemed "fit to burst with good ideas" by Q, and awarded 9.0 by Pitchfork.

Somewhere in the middle of all this the Britpop wave came and went. It was a wave worth catching but when it broke Supergrass, who'd established themselves long before the scene even existed, were one of the few bands of the era to avoid being swept back out to sea with the changing tides. In fact, they found a new lease of life: in 2002, seven years after he was first seen playing piano in the 'Alright' video, Gaz's older brother Rob - a longtime member of the touring band who'd also worked with the band in the studio from 'In It For The Money' onwards - official joined Supergrass as a permanent member. 'Life On Other Planets' became Supergrass's fourth Top 10 album, and the band were handpicked by David Bowie to appear at that year's Meltdown. There were bumps in the road (including but not limited to a scrapped album and Mick sleepwalking out of a hotel window) but Supergrass's 2005 album 'Road To Rouen' drew in its share of plaudits, prompting Uncut to note that Supergrass had turned out to be "far and away the most fun and musically savvy of the Britpop set", praising the album's "low-key brilliance". The review ended on a strange note: "It's hard to escape the impression that, tragically for Supergrass, it feels like the end of the road."

That observation wasn't far off, but there was a little more to come in the form of 2008's 'Diamond Hoo Ha', which saw the band working with Bad Seeds producer Nick Launay at Berlin's Hansa studios. "You never would have expected Supergrass to grow like they have," NME noted in its review. "Yet, 13 years on, they're flourishing." Internally Supergrass were definitely not flourishing.
Eventually, in the spring of 2010, Supergrass announced their split. In their joint statement one of the more musically different bands of modern times admitted: "We still love each other but, cliché notwithstanding, musical differences have led to us moving on."
After four farewell shows an incomplete seventh album was shoved in a drawer; and that, for Supergrass as a band, although not for its members' future solo endeavours, was that.

In 2019 so much that was pivotal in the Supergrass story has moved on. Songs that once pumped on stereos now stream from voice activated digital assistants. Print champions such as Melody Maker, NME, Smash Hits and Select grace shelves of the great newsagent in the sky; CD:UK and Top Of The Pops, on which the band made countless appearances, are off air. John Peel, an early champion who included 'Caught By The Fuzz' in a Festive 50, has passed on. The Jennifers' first label is long gone and as for Supergrass's old label, EMI... Well, that's a long story.

The smartest popstars never allow themselves to be distracted by legacy or longevity; the best pop can only hope to be relevant in the future if has first meant something in the moment it was created. In one early interview Supergrass, whose earliest music was a perfectly articulated celebration of the nihilism of youth, took a smart stance on their own future: "We're aware we could disappear overnight," Gaz decided. As for success? "If it's going to happen, it'll happen."

And somehow it did happen, to the tune of millions of album and single sales, hundreds of gigs, blanket critical acclaim and, yes, a legacy that exists purely because nobody was trying to create one. Now in 2019 it's happening again. And while few among us would claim to be young any more, thanks to those three (then four) fellas in the bath, some great dental hygiene advice back in the day and the Proustian rush of songs that continue to fizz, thrill, and tickle the senses, we can still feel alright. 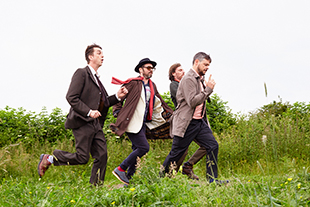