21 year old beaux’s knack for melodic pop synths come to the fore in his ambient new track ‘by the lake’, out today via Dirty Hit. The conversational tone of the track is about finding moments of peace and contentment in a whirlwind of a year, showcasing his infectious production skills and soft vocals. The release of ‘by the lake’ is accompanied by a live performance video of beaux playing the song in his home studio, watch below.

Of the track, beaux says “I wrote ‘by the lake’ during the height of the first lockdown, when the only thing you could do outside of your home was go on walks. My girlfriend and I spent a lot of the time skateboarding and going to a big lake near where I live.

When I wrote the song, I’d just bought a new synth, and ‘by the lake’ was the product of me messing around with it. When you listen, I want it to feel like you’ve been taken to another place; as if by a peaceful lake on a summer day, an oasis of calm within the turbulent times we’re living in.”

Following the release of his debut EP I Don’t Want To Make It Alone, I Want To Make It With You earlier this year, ‘by the lake’ is a taste of new music to come from Dirty Hit’s newest pop prodigy in 2021. With sonic touchstones from Rex Orange County to Troye Sivan to The 1975, beaux’s self taught, super catchy synth driven pop and indie sensibilities are paired with intimate storytelling - setting his stall as an exciting new talent to watch in the new year. 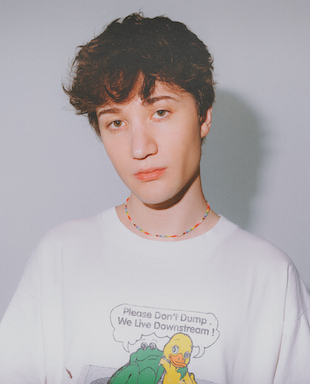