The debut album from 'Humanist' is the perfect showcase for multi-instrumentalist Rob, who plays and produces all of the music: a swirling Niagara of fuzzed-out industrial melody and noise... perhaps it's in the blood: Rob hails from Teesside in the North East of England, a land of blast furnaces, petrochemical estuaries and fiery skies.

Revered for his blistering live performances in Exit Calm, Humanist now take to the stage with a remarkable live band: a visual fest of light, image and sound. Humanist offer an immersive live experience, evocative of bands like UNKLE, Killing Joke, and Doves. This visual setting provides each track with distinctive elements, united by an overarching exploration of Humanism and performed by guest vocalists - a unique and mesmerizing show that translates across large stages as well as intimate venues.

'Humanist' are available for UK and EU festivals 2020 and tour supports.

"Marshall evokes the spirit of Martin Hannett to join him at the console... a menacing air pervades..." - The Wire 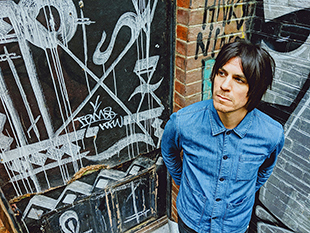