"We don't want people to just listen to our music on a surface level. We want people to dive into the songs and dissect them and to really feel them," explains Brent Walsh, vocalist for the San Francisco Bay Area band known as I The Mighty.

Since their 2007 inception, I The Mighty has melded together effortlessly and has already built up an impressive following of fans nationwide, seeing regular rotation on local modern rock station Live 105, and sharing stages and touring with the likes of Deftones, Coheed And Cambria, The Dear Hunter, Say Anything, Eisley, letlive., and more.
This summer, the band will perform double sets daily on the 2014 Vans Warped Tour - on the Kevin Says Stage and at the Acoustic Basement Tent.

I The Mighty released their debut full-length album, 'Satori', in June 2013. Of the new album, Walsh explains, "When the writing process for the new record began, I was going through a pretty rough break up. After the initial heartbreak, I did some soul searching and that's where a lot of the song conceptions for 'Satori' came from. The word 'Satori' is actually a Japanese Buddhist term for 'awakening' or 'enlightenment' which, when we stumbled upon it, just felt right. Not only because it embodies sort of what I went through during the writing process, but because it also carries the message of what the more politically themed songs on the record are all about. Not to mention, it's our debut full length and this album feels more 'us' than we have ever felt."

I The Mighty released 'Karma Never Sleeps' EP, their Equal Vision Records debut and sophomore EP, in March of 2012. The EP showcased a new side of the band, offering a heavier, darker sound and moodier ambience than their previous work. The ambitious and captivating EP, which - like 'Satori' - was produced by Erik Ron (Panic! At The Disco, VersaEmerge, Foxy Shazam), features six sweeping tracks filled with intense vocals, catchy hooks, charging guitars and explosive instrumentations that make for a mesmerizing whirlwind of cinematic soundscapes.

While 'Karma Never Sleeps' envelops the listener into dramatic, dreamlike imagery of tales of political corruption, desperation and despair, lyrically infused with powerful and poignant storylines woven around a theme of 'Karma; Satori' shows a more personalized, intimate look into the mind and experiences of Walsh. "This is definitely the most straightforward and honest effort lyrically that I've done, and I'm very proud of that. Much of our older material, I hid behind the facade of a story or character. The only song on the record that holds true to that older I The Mighty style is 'The Frame II: Keep Breathing', which is the prequel to 'The Frame III: Sirocco' on 'Karma Never Sleeps'. With the exception of that, the album is almost an open book, self-lead therapy session for myself; sprinkled with the typical politically charged songs of frustration."

Musically, the album follows the foreshadowing of the EP, with soaring choruses, intricate layerings of guitarwork and most notably - a vastly wide array of vocal dynamics ranging from Walsh's naturally sultry R&B croon to a delicately dreamy falsetto and even incorporates some of his most intense vocals to date with the incorporation of a deep, passionate scream in moments of utmost sincerity and emotional fury. The diverse deliveries of vocals are further highlighted with exceptional framing of gang vocals, impressive multi-layered harmonies and dramatic yet balanced instrumentations.

I The Mighty has officially come into their own with 'Satori' and are prepared to tour non-stop in support of it - hoping to leave a lasting and meaningful impression with each and every audience. "We want to tour the world. We want to continuously put out records that mean a lot to us. We want to put our own stamp on the music scene by developing our own sound. We want to continuously set and reach goals throughout our career so that we can better ourselves as musicians and people," Walsh concludes. "And the thing we hope for most...is that our music means something to someone, the way that other artists have meant so much to us in our lives." 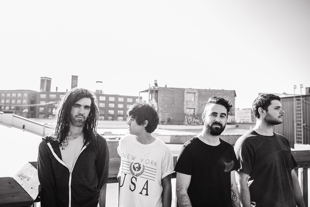