Life-changing serendipity happens only to a chosen few, and that moment took musician-artist Deena Lynch by surprise while playing an Iggy Pop tribute night in her native Brisbane, Australia. After witnessing the unhinged performance of a guy emulating Iggy, she knew she had to up her game. “So, I cracked down two tequila shots,” she recalls, and then transformed into a bona-fide banshee. “Everything I ever suppressed came spilling out. My shame and inhibitions broke down. I wasn’t afraid.” After that primal performance, she earned the nickname-turned-stage name Jaguar Jonze.

Signed to Nettwerk Records, Jaguar Jonze has released “You Got Left Behind,” “Beijing Baby,” and “Kill Me With Your Love” from her 2020 debut EP. At home in Australia, Jaguar Jonze has garnered the attention of The Music, Fashion Journal, Industry Observer and Tone Deaf, who writes "to sum up the creative explosion that is Deena Lynch into a neat little elevator pitch would have even the most qualified of journalists in tears." Jaguar Jonze was named by Cool Accidents as an “Artist To Watch” for BIGSOUND 2019 and was also named in Richard Kingsmill’s (Triple J) “Top 5 Artists from BIGSOUND 2019.” Deena is also a Triple J “Unearthed Feature Artist,” and made her performance debut on “Like A Version” for a cover of Nirvana’s “Heart-Shaped Box,” alongside friends Hermitude. Jaguar Jonze also competed in Eurovision Australia Decides 2020 with her own original song “Rabbit Hole.” Abroad, after features on Spotify and Apple Music playlists, FLAUNT Magazine deemed her “nothing short of a manifold visionary.”

Jaguar Jonze’s music is multi-dimensional, representing her multicultural roots with her Taiwanese mom and her Australian Dad. Ultimately, Jaguar Jonze—and its adjacent projects, her narrative illustration project Spectator Jonze and her gender-subverting photography project Dusky Jonze—would become powerful ways in which Deena could process her most intimate vulnerabilities and traumas, while also using it to empower those around her to do the same. Her art in all facets, whether it be her music, visual art or photography is a logical extension of these vulnerabilities with each project mining depths of her personality. 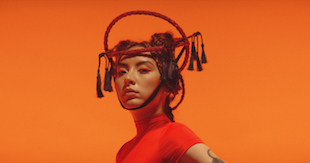