The suburbs of Western Sydney is a melting pot of creatives but none have managed to break the mould like 22-year-old Ghanaian-Australian producer, writer, rapper and engineer Kwame has.

A chance meeting with A$AP Ferg confirmed the path he now treads and set the young hip-hop prodigy on a quest to empower others through music, just as he had been before. Piquing the early interest of industry with debut EP 'Lesson Learned' and lead single 'Friends', Kwame's first release saw him become one of the most played artists on triple j Unearthed.

A one year gap between releases allowed the young producer to refine his DIY production and prepare a mighty follow up. Bursting into 2018, the Kwame returned with summer hip-hop anthem 'WOW' from his EP 'Endless Conversations'. Written and produced by Kwame, the release propelled him into a triple j Unearthed Feature Artist spot, triple j rotation, and multiple Spotify playlists.

Kwame backed this up by taking out the winning spot on triple j's Splendour in the Grass competition and WOWing crowds with knock-out showcases at BIGSOUND festival. His second single off the 'Endless Conversations' EP, 'NO TIME', earned Kwame even more praise and sealed his position as the new king of Australian hip-hop scene. With over six million streams on both 'WOW' and 'NO TIME' combined (and climbing), the momentum hasn't stopped.

As if all of this wasn't enough, Kwame took out the title of triple j's 'Unearthed Artist of the Year', FBi Radio's 'Next Big Thing' and 'Song Of The Year' awards. Following the release of his single 'CLOUDS' - premiered by Apple Music's Beats 1 Radio with Zane Lowe - Kwame jumped into a string of headline shows across Australia, all of which sold out before travelling to the US for three packed showcases at Austin's SXSW festival.

His next solo single 'STOP KNOCKING @ MY DOOR!' was met with huge fan support and industry acclaim. Quickly passing half a million streams, the track received triple j rotation, playlisting from Apple Music as well as earning the cover of Spotify's A1 Hip-Hop, The Drip and New Music Friday.

Premiering with Zane Lowe on Apple Music's Beats 1, this powerful anthem of self belief was born out of Kwame's frustration with life, the creative industries and those who think they know it all. "The track itself is a huge reflection of the years I've had thus far, seeing many people come and go. It's a reminder for myself and anyone else to listen to yourself, outside opinions are irrelevant," he says. Kwame explains that the "idea of putting these actions into place is simple, it all starts by singing the one line of the hook: can't nobody tell me no no more."

"He's the movement's youngest by age, but arguably its most visible by virtue..." - triple j

"Kwame has long been on our radar of international MC's to watch." - Highsnobiety 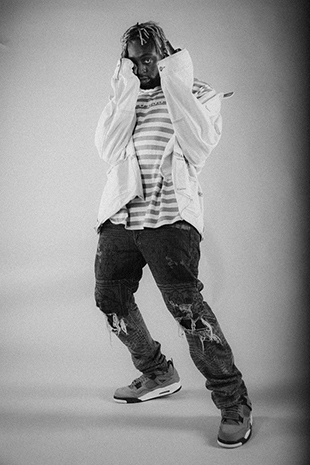