Born to a Nigerian father and a Ghanaian mother, Loick has been surrounded by music throughout his life. From the age of four he would frequently perform in front of his mother's hairdressing clients. Inspired by the late Michael Jackson and Bobby Brown he spent his childhood discovering a variety of music that contributed to enhancing his own dance skills and vocals. He later studied at the Sylvia Young theatre school, a specialist performing arts school in Central London where he met other future stars such as singer Rita Ora and actor Nicholas Hoult. When Loick was 12, production guru Skillz was truly amazed by his vocals after hearing him sing between takes on a music video shoot and began working with him. Loick was soon presented with the opportunity to work alongside established home-grown talent, including Jamelia and other wellknown producers. He was then taken on by the renowned manager Jonathan Shalit, who has also worked with the likes of Sir Elton John and Mel B. Essien began his successful musical career in 2007 with his feature on Bashy's underground classic 'Black Boys', which generated incredible response and feedback and led him to collaborations with Chipmunk, o n his debut single 'Beast', and, again, with Bashy, on 'When The Sky Falls'. In 2008, Loick was featured on the theme song for the UK Box Office hit 'Adulthood'. In 2010, Loick released his debut solo single produced by Labrinth, 'Love Drunk', through Sony Music, and debuted at #56 in the UK chart.

Prior to the release of his debut album 'Identity', three more singles were released, including 'Stuttering', with rap group N-Dubz, which was released in February 2011, followed by the double-platinum single 'How We Roll' which peaked at #2 in the UK charts and featured Tanya Lacey. After signing to Sony RCA in 2012, Loick released 'ID'. This was a mixtape featuring some of the UK's most prolific stars such as Tynchy Stryder, Wretch 32, Chipmunk, MS. D and Nicki Minaj signee, Parker amongst others. Later on, in 2012, Loick and Sony parted ways. His most recent musical work entitled 'Terminal 5 EP' was a highly anticipated 10 track project featuring Chip, Stormzy and Stefflon Don and was released in September 2016.
The project featured the single 'My Way'. Over time, Loick has recorded and written with some of the best national and international talent around, Including Krept and Konan, Professor Green, Giggs, Fekky, Scorcher, K Koke, Nines, Moelogo, Naughty Boy, Fraser T Smith and Harmony Samuels. As well as the likes of Espionage, Johntae Austin, Lashawn Daniels, Darkchild, James Fauntleroy, Eric Dawkins and Stargate. Alongside a long and successful musical career, Loick has also been involved in acting, featuring in large television series such as 'Doctors', 'Prime Evil', Kerching! and was involved in a KFC advert. He has also made appearances in TV shows such as 'Never Mind the Buzzcocks' Over the years, he has featured in many music videos such as EastEnders' actor Richard Blackwood's top ten hit 'Muma Who Da Man', where he played the a younger version of Richard. In the gaming world, Loick played a pivotal role in the 2004 hit PlayStation game called 'Getaway: Black Monday'. In the action adventure game, Loick is the voice behind one of the main characters called 'Sleeves'.

Now in 2018 the West London singer has signed to Virgin EMI and is ready for the next chapter to his musical career and to return with his latest LP, which is currently untitled. The inspiration for the project first started from his experience of being out in L.A for 6 months working with some of the most experienced songwriters and producers in the music industry such as the Justin Bieber, Usher and Bruno Mars producer Stereotypes, the Kanye West and Jay-Z producer Sak Pase. He also worked with Jeremih and Keisha Cole collaborator, Williedonut, with Goldie, whose production is featured on Chris Brown's album 'Royalty' and also with producer Keyzbaby, who has production credits for artist such as Beyonce and Bryson Tiller. The new album is Loick in his prime. Maturing as a singer and songwriter, he is able to be more honest than he has ever been over melodic sounding, dark RnB tracks, which have Trap and Hip Hop influences running throughout, as well as a nineties style aesthetic. Majority of production was handled by Crumz, D Major and 6aby and was a chance for Loick to strike up a partnership, allowing skilful creative's to put together an outstanding body of work with a consistent theme running throughout. The untitled LP has UK and international artists. 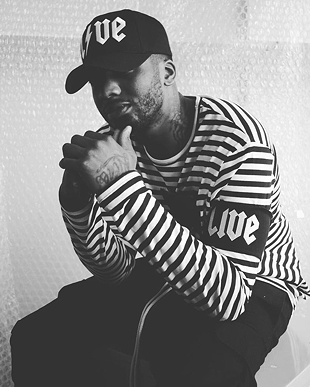