Made up of lead vocalist Joshua Roberts, guitarists Tristan Torres and Freddie Criales, bassist Jared Kay, drummer Joe Horsham, and keyboardist Vincent Ernst, Magnolia Park have recorded almost all their output to date with Audio Compound producers Andrew Wade and Andy Karpovck. The first iteration of the band formed in 2019, with a mission of inventively fusing genres while increasing inclusivity in the punk world. “There’s not a lot of people of color in our scene, so we want to show everyone that it’s okay to look like us and play this kind of music,” says Torres. Roberts adds: “We have an amazing opportunity to connect with a lot of people through our music, and we definitely want to use that to make a positive impact.”

The follow-up to their early-2021 EP Dream Eater, Halloween Mixtape features such standout tracks as “Kids Like Us,” an anthem for all those who’ve struggled with being marginalized. “That song came from me and Josh and Freddie talking about certain experiences we’ve all had over the course of our lives,” says Torres. “It speaks about growing up as a person of color, dealing with police brutality and fighting against racism. To this day we still get hate from people telling us that we can’t play the music we’re playing because of the color of our skin, so we want to let all the kids know that they can do whatever they want to do, and that nobody’s hatred should get in the way of that.”

Named for a park in their hometown, Magnolia Park first discovered their singular sound with a track called “Outside,” released in early 2020. “From the beginning we knew we wanted to create something new that mixed hip-hop and pop-punk and emo and electronic music, and that song took it to a whole new level,” says Torres. After the premiere of “Outside,” Magnolia Park continued putting out singles and building up their following, then headed out on tour with Lil Lotus in summer 2021. Following a show at The Echo in Los Angeles, the band’s deal with Epitaph was quickly set in motion. “Epitaph felt like the perfect fit for us, and we’re really excited for the band to be moving forward with them,” says Kay.

With the arrival of their Epitaph debut, Magnolia Park look forward to raising even further awareness of the issues they find essential, including mental health. “Some of the band members struggle with mental health problems, and a big part of our music is shining a light on that,” says Torres. “It’s such a crazy world to begin with, and then when you add all the stress of the pandemic and the hatred that so many people are dealing with, it’s really easy to feel lost.”

Along with providing comfort and connection through their music, Magnolia Park hope to bring a deep sense joy to their audience. “We’re all just very down-to-earth people who love making music together,” says Kay. “We want our songs to leave people in a better place than they were before, and hopefully make a lasting impression on this generation and those to come.” 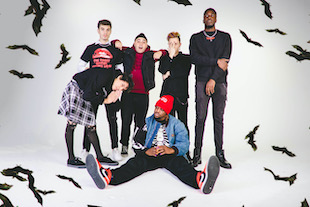