Gorton born rapper Meekz Manny achieved quick success after only four months of producing music. Meekz began his career having first featured on P110 with Scene Smasher in December 2018 later releasing tracks including ‘TRXPPISH’ and ‘Take Losses !!’ on SoundCloud. After featuring on P110: Music’s Hoods Hottest, landing on YouTube in January 2019 with over 7 million views, Meekz really took off and became one of Manchester’s best rappers. Meekz later went on to feature on Mixtape Madness with Kenny Allstar with ‘Mad About Bars’. Meekz’ career really started to take off in October 2019, he went on to release ‘Rap Aside’ produced by Kwes Darko with over 2.4 million views on YouTube and 1.4 million plays on Spotify.

With Meekz being one of the most talked about rappers in Manchester and now the UK, he teamed up with DJ Cee Gordon for the release of ‘6 Figures’, to end 2019 on a high. Now with over 191,000 followers to date and his own “6 Figure” clothing line, for Meekz the best is yet to come.

Meekz opened 2020 by releasing ‘Year Of The Real’ alongside M1llionz, Teeway and Pa Salieu. This became a defining moment in UK drill showing his versatility and ability to succeed in any genre.

They’re all brand new artists and they smashed it out the park, that’s a massive tune for me.’ – Tiffany Calver on ‘Year Of The Real’

2020 has seen the release of Meekz debut EP ‘Can’t Stop Won’t Stop’. This gained huge success and secured Meekz the number 32 spot in the official charts.

Following the EP, Meekz’ single ‘Like Me’ has received millions of streams and also been added to Rinse FM and Radio 1Xtra’s A lists. The ground-breaking visuals showcased Meekz’ artistic vision alongside his innovative and catchy lyrics.

The success Meekz has gained in 2020 alone proves his seriousness to the music game. 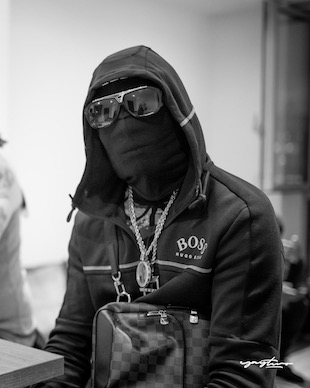