Palm plays rock music backwards. Their songs bear a certain methodology, though there is a tendency towards impulse which seems almost violently opposed to it. The band deals willfully in contradictions like this. The elements of any given song fit together like slightly melted puzzle pieces, serving up rigidity and looseness in equal measure. Palm songs imply architecture, but their compositional structures are somehow bound by different rules of physics than the ones we know. Lattices of guitar language (provided by Eve Alpert and Kasra Kurt) intersect the rhythmic organism characterized by the twitchy throb of Gerasimos Livitsanos' bass and the careless tumble of Hugo Stanley's drums, with a layer of disembodied vocals draped atop the whole thing. Emotional yet clinical, wild yet contained, the sounds they offer are equally bizarre as they are pleasantly pretty.

Palm formed around 2011, shortly after its members met in college in Upstate New York. The years they spent writing and playing when not in school culminated into the release of 'Trading Basics' in 2015, around which time they relocated to Philadelphia. Since then they've been playing shows throughout the country while they continue to hammer out their sound to be as refined as it is outlandish. More to come. 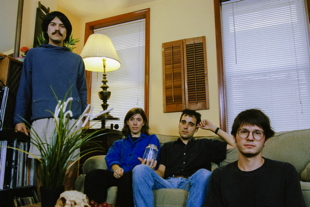