Patti Smith, born in Chicago and raised in South Jersey, migrated to New York City in 1967. Her extensive achievements as a performer, author, recording and visual artist is acknowledged worldwide.

Released in 1975, Smith's first recording, 'Horses', was inducted into the National Recording Registry at the Library of Congress in 2010 by the National Recording Preservation Board. Her subsequent albums include 'Radio Ethiopia', 'Easter', which included 'Because the Night', cowritten with Bruce Springsteen, 'Wave', 'Dream of Life', which included 'People Have the Power' cowritten with her late husband Fred Sonic Smith, 'Gone Again', 'Peace and Noise', 'Gung Ho', 'Trampin'', 'Land', 'Twelve', 'Banga', and 'Outside Society'. She is a four-time Grammy® nominee and a Golden Globe nominee for the song 'Mercy Is' cowritten with Lenny Kay for the film 'Noah'. Steven Sebring's 2008 documentary, 'Patti Smith: Dream of Life', received an Emmy nomination.

Patti Smith was awarded the prestigious 2010 National Book Award for her bestselling memoir, 'Just Kids', chronicling her deep friendship with photographer Robert Mapplethorpe and the evolution of their work.
Her books include 'Witt', 'Babel', 'Woolgathering', 'The Coral Sea', 'Auguries of Innocence', 'Collected Lyrics', 'M Train', 'Devotion' and 'Year of the Monkey'.

Smith holds the honor of 'Commandeur des Arts et des Lettres' from the French Ministry of Culture. In 2007 she was inducted into the Rock and Roll Hall of Fame. She was honored by ASCAP with the Founders Award in 2010, representing lifetime achievement, and was the recipient of Sweden's 2011 Polar Award, an international acknowledgement for significant achievements in music. In 2013, Smith received the Katharine Hepburn Medal from Bryn Mawr College, recognizing women whose contributions embody the drive and work ethic of the celebrated actress.
In 2014, Barnard College Board of Trustees presented Patti Smith with their Medal of Distinction. In 2016, she was awarded the Burke Medal for Outstanding Contribution to the Arts in Trinity College, Dublin.

Smith's photographs, drawings, and installations have been exhibited in galleries and museums worldwide. Coupled with her photography exhibit 'Higher Learning', Smith received the Laurea Magistrate causa from Parma, Italy and an honorary doctorate in Euro-American Literature from Padova University. She was awarded The Badge of the Austrian Decoration of Science and Art in 2019.

Her renowned band includes guitarist and author Lenny Kaye, who she has collaborated with since 1971, drummer Jay Dee Daugherty since 1975, Tony Shanahan on bass and keyboards, since 1996, and her son, guitarist Jackson Smith, for over a decade. 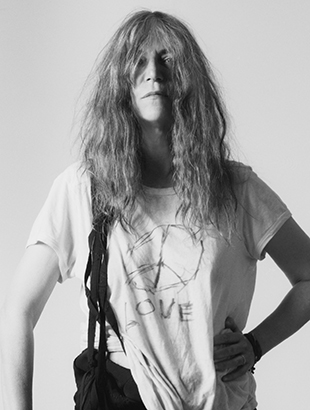