Emerging Liverpool based performer, producer and multi-instrumentalist Pixey has today shared her brand new single and video ‘Just Move’ on new label home Chess Club. The track was written, recorded and produced in Pixey’s bedroom in Liverpool - with additional production added by frequent Gorillaz and Jamie T collaborator James Dring in London. While its hyperenergetic video was directed by Daniel Broadley. Pixey grew up in the sleepy but picturesque village Parbold, Lancashire before moving to Liverpool for school and remaining there to this day.

The track marks Pixey’s debut release on Chess Club - a label famed for breaking new talent, where recent exciting signings include Alfie Templeman and Phoebe Green, and past successes include Jungle, Wolf Alice and Easy Life. Speaking about ‘Just Move’, Pixey says: “‘Just Move’ was written and recorded in my bedroom at the beginning of lockdown. I thought it would be ironic to write a dance tune when the last thing anyone would be doing is going out and actually dancing. On the flip side I really missed going out and doing something that simple. It's a clear instruction - the song's meaning is as literal as it sounds. With the last few months feeling so complicated and unprecedented I thought it would be refreshing to write something with a simple request, as dancing and moving is in (most) people's nature!”

Pixey first discovered music as a toddler - she remembers not even being able to walk yet but desperate to sing and dance to Queen - before discovering the likes of Kate Bush, Björk, and George Harrison, whose classic songwriting struck a chord with her in her youth. The catalyst for Pixey’s musical coming of age however, was a near fatal viral illness suffered in early 2016 which hospitalised her, she says: “When I thought I was going to die I thought of all the things I wish I’d done and music was the first thing I thought of. As soon as I started recovering I started learning to record and produce.” She taught herself Ableton production software before mastering guitar and eventually drums and bass after her previous (and current) boyfriend(s) left their instruments lying around to prove she could learn it quicker and play it better.

Once able to carve out her own sound, Pixey turned to The Verve, The Prodigy and De La Soul for sonic inspiration, adding: “I particularly like the idea of using samples/making my own riffs sound like samples which was heavily inspired by the [De La Soul] album 3 Feet High and Rising. Starting out initially though Grimes was a huge catalyst when I realized she wrote, recorded & produced herself.” Her prolific and unusual songwriting style stems from an original riff or beat, with further layers added as she records and produces, and lyrics being added last - the process taking only a day or two.

Now, with a whole arsenal of unreleased material readied on her new label home, Chess Club, Pixey is primed for big things in 2020 and beyond. 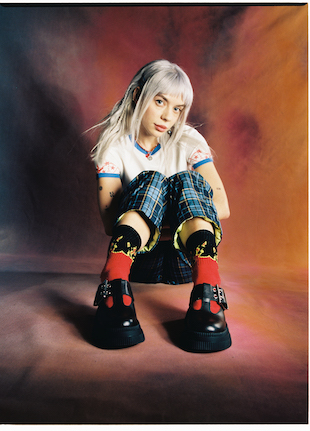