In the beginning Self Esteem was a joke - or at least a half-joke. A band name coined 10 years ago, by the singer Rebecca Taylor as two fingers to the insecurities and self-doubts that had long mithered her life. But over the past 18 months, Self Esteem has come to mean something more; the humour fading as the name has reflected the shift in Taylor's own opinion of herself and her place in music.

Taylor was always wrestling with the task of reducing herself, with the challenge of being quieter, smaller, well behaved. Raised to try to be "good and polite and ladylike", at school in Sheffield she was the consummate performer, the girl they "wheeled out when the Korean exchange was there and I'd give my Fantine again."

But always she felt she was containing herself. "Because I was mad and loud and all my school reports said 'She's too much'. I felt what I was really like was squashed," she says. "And then I went straight into the band, and I was Too Much there as well."

The band was Slow Club, the duo Taylor formed with Charles Watson in 2006 and recorded five albums, including 2016's critically acclaimed, Matthew E White - produced 'One Day All of This Won't Matter Any More'.
While the band enjoyed success and great adoration, the fact of being in a duo at times left Taylor feeling somehow crushed. "I had to grow up half of something," says Rebecca Taylor. "Ever since I was 17, I couldn't be 100% myself because Slow Club represented two people. There would be the moments on stage when I would let rip, but I was always a meek version of me."

It's not hard for a woman to be deemed Too Much in the music industry; better, as Taylor says, to stay meek and malleable and pretty. Those early years in Slow Club were an education in how a female artist is expected to behave. "I've had so much bollocks off men being unbelievably sexist towards me," she says. The tour managers who told her all she needed to do was "get in that little dress of yours". The sound men who told her she shouldn't wear sliders on stage. Each time she questioned herself, her appearance, her attractiveness and self-worth.

When Slow Club announced they were placing the band on the backburner to pursue solo projects, there was an immediate musical divergence: Watson strode off in the direction of warm west coast folk rock. Taylor, the band's extraordinary, heart-swelling vocalist, took a different route.

If their division had in fact begun anywhere it was following a particularly dispiriting appearance on Sunday Brunch, during which Taylor recalls her embarrassment and unease as the host gave her the lion's share of the attention. Afterwards, a new and surprising thought occurred: "What great artist ever worried about whether they were the centre of attention? Or whether people liked them? Or cared if people gave them good reviews?'"

In her post - Slow Club life she decided there would be no compromises, no reducing herself, no hesitating. She would write the songs that had been rising up inside her all these years - big songs, that spoke of love and sex and chaos, that brought in huge basslines, gospel choirs, the kind of polished, provocative production she admired on the biggest pop records. Songs that could be danced to, lost in, devoured. That captured, finally, the enormity of what she wanted to be.

Self Esteem took shape while Taylor was in a long term relationship with a woman, and it was only when she emerged from that relationship that she felt a new flash of vulnerability. "I had these mad attacks of wanting to be femme," she says. "I absolutely lost my mind. I was like 'I need to grow all my hair back! They want hot girl to come on stage!'" It took a moment for her to find her footing again. "I don't hate men. Not at all, I fancy loads of them" she says. "But I realised: 'I've spent my life trying to be what you wanted.'"

Discovering what she herself wants has been a gradual process. When she was still in the band her liking for hip hop was roundly dismissed. "It was just such a dirty thing I couldn't even explore," she says. "But I remember everything changed when 'I heard My Beautiful Dark Twisted Fantasy' by Kanye. I used to just sit and play along to it on the drums," she recalls. "And I still like those other things, I still like Bright Eyes, but it's nothing compared to Destiny's Child 'Writing's on the Wall', or all Rihanna songs."

The difference is largely one of rhythm. "I always used to say I don't like four to the floor because there's no room to move your body in between each kick," she says. "I've always much preferred syncopated stuff, and I'm still just obsessed with just a ragga. It's my favourite thing. It's just being able to move your body. The space in the beat."

Several years ago Taylor began writing new rhythms that would become Self Esteem songs and eventually her debut album 'Compliments Please'.
"The first few were just banging on a table," she says. "The rhythms start, and then I can just put a melody with something. It's all acapella. So then I would just harmonise with that. But I didn't play them anyone for ages, years."

Eighteen months ago, Taylor began working with producer Johan Karlberg, seeking him out because she loved his band, The Very Best, as well as his approach to production: "He loves the fattest beat possible, and he loves to fuck with them, to find what would make it weirder, or that would make it dirtier - that's second nature to him, and it is to me too," she explains. She points to one of the album's highlights, 'Favourite Problem', as an example of how they work together: "It's kind of a ballad, and then the drums come in and it goes into an interlude with my friend Alessandro reading a poem that I wrote over it. And that beat there is the same beat but backwards and slowed down..."

While she has relished this collaboration, it has been both a liberation and a shock to find the final creative decisions now rest with her.
"Making this album I realised that in Slow Club it was always such a battle," she says. "So I had to be very sure what I wanted to get out of the battle. Now the dopamine that you get from winning those battles is gone. And I can do whatever I want. There's no litmus test. I've got to just live like nobody knows better than me."

It's been a long time since we had a big British pop star, and in that time the landscape - musical, political, sexual, has changed markedly. What 'Compliments Please' brings is a new kind of pop - not the processed, conveyor belt, teen fodder of yesteryear, but something proudly, powerfully female.

She is 30 now and thinks often about what that means for a woman in music. "Sometimes I think I'm a bit old to be doing this," she says.
"And then people go, 'Well, look at Sia' and I'm like, 'Sia has a bag on her head. She. Has. A. Bag. On. Her. Head.'" She is keen to question the way that women are expected to behave. "I'm interested in what if you don't get married and have kids," she says. "What if you don't do those things? What are you? What are you doing? I'm interested in how it takes a lot, every day, to remember to be as old as you are, to be the body type that you are, to go forward and believe in that."

It is through asking these questions, through taking up space, through refusing to believe that she is Too Much, that Taylor has written the album of the year: a phenomenal pop juggernaut that reveals her to be not just a remarkable vocalist, but one of our most powerful and distinctive songwriters. It is a debut that is unapologetic, witty, self-aware and uncompromisingly huge.

"Only now am I feeling like it's alright to be ambitious or have ideas. It's blowing my mind," she says. "I was so girly, so submissive. And it's time to just be true. No one's gonna fuck with me now." 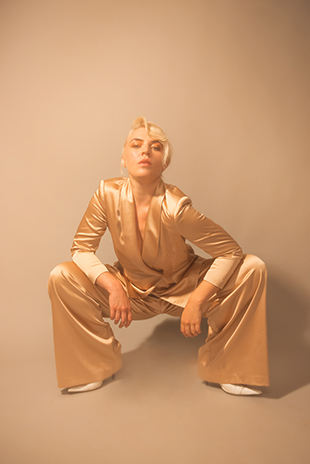