"It felt like we were in a movie that had a totally implausible ending..."

Slowdive's second act as a live blockbuster has already been rapturously received around the world. Highlights thus far include a festival-conquering, sea-of-devotees Primavera Sound performance, of which Pitchfork noted: "The beauty of their crystalline sound is almost hard to believe, every note in its perfect place."

"It was just nice to realise that there was a decent amount of interest in it," says principal songwriter Neil Halstead. The UK shoegaze pioneers have now channelled such seemingly impossible belief into a fourth studio opus which belies his characteristic modesty.
Self-titled with quiet confidence, Slowdive's stargazing alchemy is set to further entrance the faithful while beguiling a legion of fresh ears.

Deftly swerving what co-vocalist/guitarist Rachel Goswell terms "a trip down memory lane", these eight new tracks are simultaneously expansive and the sonic pathfinders' most direct material to date.
Birthed at the band's talismanic Oxfordshire haunt The Courtyard - "It felt like home," enthuses guitarist Christian Savill - their diamantine melodies were mixed to a suitably hypnotic sheen at Los Angeles' famed Sunset Sound facility by Chris Coady (perhaps best known for his work with Beach House, one of countless contemporary acts to have followed in Slowdive's wake).

"It's poppier than I thought it was going to be," notes Halstead, who was the primary architect of 1995's previous full-length transmission 'Pygmalion'. This time out the group dynamic was all-important. "When you're in a band and you do three records, there's a continuous flow and a development. For us, that flow re-started with us playing live again and that has continued into the record."

Drummer and loop conductor Simon Scott enhanced the likes of 'Slomo' and 'Falling Ashes' with abstract textures conjured via his laptop's signal processing software. A fecund period of experimentation with "40-minute iPhone jams" allowed the unit to then amplify the core of their chemistry. "Neil is such a gifted songwriter, so the songs won. He has these sparks of melodies, like 'Sugar For The Pill' and 'Star Roving', which are really special. But the new record still has a toe in that 'Pygmalion' sound. In the future, things could get very interesting indeed."

This open-channel approach to creativity is reflected by Slowdive's impressively wide field of influence, from indie-rock avatars to ambient voyagers - see the tribute album of cover versions released by Berlin electronic label Morr Music. As befits such evocative visionaries, you can also hear Slowdive through the silver screen: New Queer Cinema trailblazer Gregg Araki has featured them on the soundtracks to no less than four of his films.

"When I moved to America in 2008 I was working in an organic grocery store," recalls Christian. "Kids started coming in and asking if it was true I had played in Slowdive. That's when I started thinking, 'OK, this is weird!'"

The world has finally caught up with Slowdive. This movie could run and run... 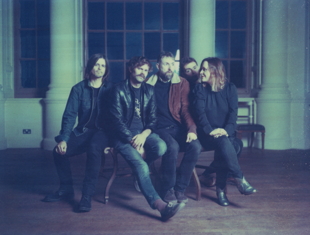