For someone who was, by his own admission, "extremely shy" as a young child, Ethan Barnett, aka TEN TONNES, cuts a strikingly confident figure. The 22-year-old musician from Hertford possesses a breezy, seemingly effortless ability to fashion snap-crackle lyrics and earworm melodies.

It's a trait that's very much in evidence throughout his self-titled debut album, which is set to be released on April 5th via Warner Bros. Records.

Its single 'Better Than Me' made a big impression at radio. Annie Mac was on board for the track's first play, while further Radio 1 backing included a Maida Vale session for Jack Saunders plus support from Dev and Alice. Subsequent airplay included the daytime list at Radio X and Chris Hawkins at 6 Music.

That momentum continued unabated into 2019 with further airplay from Annie Mac at Radio 1, Lauren Laverne at 6 Music and Jo Whiley at Radio 2, where it was added to the C List. 'Better Than Me' was also played on Chris Evans' first show for Virgin Radio, which TEN TONNES soon followed by landing daytime support.

And to cap it all, TEN TONNES was featured in YouTube's 'Ones To Watch 2019' playlist as well as Radio X's 'Great X-Pectations' list of the best new music, artists and bands for 2019.

2018 saw TEN TONNES complete a busy year of touring which he concluded by hitting the UK and Europe as guest to his brother George Ezra. He also played packed arenas with Stereophonics, instigated chaotic scenes with Rat Boy and won over crowds when touring with Tom Grennan. He's now about to embark upon a sold-out headline tour which culminates in his biggest show to date at London's Scala.

That's where Ethan's at now. The question is, how did he get here?

His parents, both teachers, encouraged their children to be creative and to express themselves. Ethan's dad "had a couple of guitars around the house, and there was always music on, things like Paul Simon and Van Morrison." He started out playing drums at the age of nine before switching to guitar five years later.

That passion continued, leading Ethan to study music production at York University. He quickly discovered it wasn't for him. "For me, when it comes to music, I want to do it, not learn about the theory. I wanted to get out there and go for it. Besides, so much of that course was about the science of it, and I'm absolutely shit at science. I mean, really bad. And working out what a sound is, I'm not bothered about that. I just want to make the sound."

That year in York involved, Ethan says, a lot of late nights and very little work. "I ended up getting zero marks, because I didn't hand any work in. My parents were very good about it, all things considered."

TEN TONNES instead focused his attention on his own songwriting.
He first gained attention in 2016 with an independently released three-track debut EP, before releasing the follow-up 'Born To Lose' under a new deal with Warner Bros. Records in 2017. A succession of singles followed, from 'Cracks Between' to 'Better Than Me', each of which delivered new admirers who had become enamoured with his talents.

Ethan isn't bothered about what people call his music - besides, it's out of his hands now, he says. Mention genres such as garage-rock and folk-pop and he smiles enigmatically; adjectives like propulsive, raucous and tender produce a similar response. It's all just music, isn't it, he eventually suggests. "Everyone goes on about things being cool or not cool, but I can't see the point of that. What does it mean, anyway?"

Now TEN TONNES is set to release his eagerly anticipated debut album, which combines a host of new material with some of the fan favourites which have accompanied his story so far.

Opening with a tenacious new take on his debut track 'Lucy', the album finds TEN TONNES exploring "the highs, the lows and the in-betweens of love and relationships" throughout a contemporary collection of sharp-witted rock 'n' roll anthems.

While TEN TONNES plays with self-deprecating and unlucky-in-love experiences on the likes of 'Better Than Me' and 'Born To Lose', the album also explores the relatable emotions of a young man who's eager to experience life outside of his hometown.

'Nights In, Nights Out' (one of two songs co-written with former Kaiser Chief Nick Hodgson) tackles "seeing the same old faces around town and needing to break the cycle", but 'Missing You' addresses bittersweet feelings of leaving. The two songs share contradictory but parallel emotions - wanting to escape but realising then what you're missing once you're gone.

Those ideas are further delved into with the reflective 'Too Late'.
"It's about being away from a relationship on the other side of the world," he explains. "I need to make the most of this incredible opportunity I've been afforded, but part of me wants to be back home in the pub chatting shit with my friends."

"It's amazing that I get to work with these people and get to call them friends and colleagues," concludes TEN TONNES. "My only ambition was to have an album out, so it feels quite strange that it's happening. I'm super fucking happy about it, and I can't wait to hold it in my hands."

"Captures that magical moment when a tyro musician is poised to go off like a rocket." - Sunday Times Culture

"This is my favourite new song of the moment... I think it's amazing, I love it." - Chris Evans

"That's so good! It's TEN TONNES, he played in session for me on the previous incarnation of this show - and was really impressive." - Jo Whiley

"You can't listen to his music without having a big grin on your face." - Vogue

"Destined to become a pop heavyweight in 2019." - Daily Star 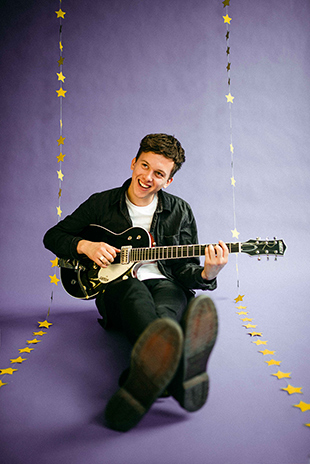