Fueled by an independent spirit and a revolutionary approach to art, Krewella is a pioneering dance music duo that has forever impacted the pop realm via their boundary-pushing sound and forward-thinking art. Originally formed in 2007 in Chicago by sisters Jahan and Yasmine Yousaf, Krewella exploded onto the scene in the early 2010s via their electronic-powered sonic style, which tackles everything from headbanging EDM to emotional electronic pop and beyond.
As one of the few independent, woman-fronted, Pakistani-American artists in dance music, Krewella today stands as one of the most successful electronic acts of this decade.

Krewella first made impact in 2012 with their self-released debut EP 'Play Hard', which topped the iTunes US Dance Chart and featured their breakthrough single 'Killin' It'. 'Play Hard' immediately catapulted Krewella to the top of the electronic game, solidifying them as a bona fide artist to watch and securing their spot as a festival-headlining act. Based on their independent success, mushrooming organic following, and widespread media coverage, Krewella secured a record deal with Columbia Records in 2012. One year later, they followed up with their breakout debut album 'Get Wet' (Columbia, 2013), which features the platinum hit single 'Alive', the latter of which peaked at #32 on the Billboard Hot 100 chart and has amassed more than 125 million total plays collectively since its release. In 2016, Krewella released their 'Ammunition' EP (Columbia), which debuted at #2 on Billboard's 'Top Dance/Electronic Albums' chart and peaked at #2 on the iTunes US Dance chart, in addition to garnering +20 million total plays.

Krewella has also collaborated with and remixed tracks for top artists in the pop and dance music realms, including R3HAB, KSHMR and Adventure Club, among others. Recently, Krewella teamed up with electronic duo Yellow Claw for the 2017 single 'New World', featuring Taylor Bennett, which has garnered +25 million Spotify streams and +2 million YouTube plays. They released a new version of the track in January 2018 featuring Chinese rap giant Vava, which has racked up +3 million Spotify streams and an additional +15 million YouTube views for its official music video.

Following years as part of the major label machine, Krewella amicably parted ways with Columbia, instead choosing to live out their dreams as truly independent artists. In June 2017, Krewella initiated their next creative phase with the launch of their own Mixed Kids Records imprint, named after their multiracial background, as their new home where they'll self-fund and self-release their art and music.
The bold move paid off: Led by power single 'Team', Krewella's 'New World Pt.1' EP, the inaugural release on Mixed Kids Records and the group's first major independent release, charted across Billboard's dance and electronic charts. (Notably, Krewella released 'New World Pt.1' on June 8, the exact date the group quit school and their day jobs seven years prior in order to pursue music full time.) Via Mixed Kids Records, Krewella reclaimed the power to experiment by their own will and create an artistic vision all their own, all the while establishing themselves as liberated creative forces no longer tied down by genre restrictions or the politics of the major label system.

"We thrive as creatives by breaking free of the self-imposed rules, expectations, and formulas of the music industry and society as a whole," Jahan says. "The choice to be independent has allowed us to be patient with the creative process and to experiment with our sound." Adds Yasmine, "Mixed Kids Records is an ode to our duality, leaning into our split cultural ethnicity, but also our love of blending different genres and sounds. Developing from a place with no boundaries is the most exhilarating aspect of releasing on our own independent label, as it promises music and content from the most genuine depths of our creativity."

After years of international touring and chart-topping releases, Krewella took a break from life on the road and slowed down their relentless schedule of nonstop recording to refocus their time and energy on creative development, personal self-discovery, and artistic experimentation. Simply put, Jahan and Yasmine set forth on a new path toward radical self-reflection and a reexamination of their relationship with art and work, allowing themselves the time, space, and mindset to create for the sake of self-expression.

The result is Krewella's new sound: a refined take on dance music that encompasses diverse styles, cross-pollinates genres, and takes cues from their multi-cultural upbringing. Indeed, Krewella remain loyal to their electronic-based foundation. But what once was a strictly dance-music-centric project has since expanded to a truly global sound.
As the next phase in their ongoing artistic evolution, Krewella's newly reimagined sonic style pulls cues from a wide array of diverse sounds-trap, Bollywood-flavored pop, R&B-tinged electronic-while exploring deeper themes of mixed ethnic identity-their father is Pakistani and their mother is American-European-liberated sexuality, and creative experimentation.

Years in the making, the new era of Krewella's sound spawns from a multitude of musical influences and personal experiences, dating all the way back to the sisters' childhood days in their Chicago hometown.
Jahan and Yasmine, who grew up in a Muslim household, credit their multi-ethnic background for their eclectic tastes today. Their multicultural upbringing was soundtracked by a wide-spanning musical diet that included everything from iconic Bollywood soundtracks, classic and progressive rock, Top 40 pop and rock, '80s new wave, and, of course, dance music.

Even so, their ethnic duality was often the root of their constant exploration of identity. Growing up with mixed backgrounds, they didn't fully relate to Americans in their Western education experience and didn't feel immersed within Pakistani Muslim social groups. What once felt like a confusing cultural no man's land became the impetus for their uniqueness. Instead, they carved their own artistic lane via a unique sound that explores both halves of their identity and marries the seemingly opposing values and traditions of Eastern and Western societies.

After more than a decade at the forefront of the global electronic music community, Krewella enters the next chapter of their artistic journey with highly anticipated new music and bold projects on the horizon that will further explore their intricate songwriting and production styles, expand their independent spirit and deepen their worldly approach to art.

Through their personal take on art, Krewella have fostered a direct bond with their fans, a global network comprising millions of followers lovingly known as the Krew. And much like their art, the universal ideals of cultural unity, love, acceptance, and gender harmony serve as the foundational pillars informing the Krew community they strive to build and uphold. On their most recent headlining tour, in spring 2018, the duo invited their fans to participate in in-person community service projects, dubbed KREWmmunity events, which included volunteer work at soup kitchens, clothes donation drives, and area beautification cleanups. (Jahan and Yasmine plan to develop and expand their volunteer and community service concept in their future touring.)
Fans have organically expanded the Krew movement into an international family, launching grassroots micro-networks in foreign lands around the world, from Germany to Russia and beyond. As the key element to the Krewella mission, their worldwide fan base has truly grown into a Krew without borders.

Most recently, Krewella have made major inroads across South Asia, particularly in India, one of the fastest-growing electronic markets in the world. They have performed at Sunburn Festival, the country's marquee dance music gathering. Even amidst growing international conflicts between India and their ancestral home of Pakistan, Krewella have connected with the youth of India and have transcended physical borders and cultural boundaries. In August 2018, they performed on the Coke Studio Pakistan TV series, which serves as one of the core music institutions in the country. The performance-which featured locally and nationally celebrated Pakistani artists performing a live ethnic rendition of the Krewella original, 'Runaway' - marked a significant, and personally fulfilling, achievement for Krewella as it served as the duo's most visible appearance in their father's homeland.

Recognized as part of Forbes' annual coveted '30 Under 30' list in 2016 for their top-billing status in the international festival circuit, Krewella have performed at major global music festivals including Coachella, Lollapalooza, EDC Las Vegas, Ultra Music Festival, iHeartRadio Music Festival, Storm (China), and many others, in addition to their own headlining tours. Additionally, Krewella headlined consecutive residencies at leading Las Vegas clubbing destinations OMNIA and Hakkasan as well as The LIGHT, attracting fans from around the world.

As one of the main elements of the Krewella canon, the group's onstage performances serve as the live extension of their music and art.
Incorporating a multitude of audiovisual elements together with Jahan and Yasmine's live vocals and powerful onstage energy, their versatile shows have expanded alongside their ever-evolving sound and visual aesthetic to encompass full-on live band performances, DJ sets and DJ-live hybrids throughout the years. Their adaptability as live performers and DJs allows Krewella the flexibility to crush sweaty dance floors in intimate venues and ignite sold-out festival crowds with equal aplomb.

The story of Krewella is one of ongoing evolution, rule-breaking art, navigating cultural identity, and exploring gender harmony, a journey they have traveled and documented throughout the years. More than a decade on, Krewella continue their artistic path with the same dynamic energy and lust for life with which they began, now armed with a vision to expand their music project into an immersive world encompassing its own culture and lifestyle.

"Activating and engaging our passionate community of fans, while balancing the solitary experience of going inward to explore the unknown realms of the creative mind, is a dance between dualities that we are becoming more in tune with," Jahan reflects. "The way Krewella unfolds into a multisensory experience that permeates so many other aspects of our lives, from culture, to lifestyle, to visual aesthetic, to self-expression, to community, has made the process of creating so fulfilling in ways that go beyond what we ever imagined." 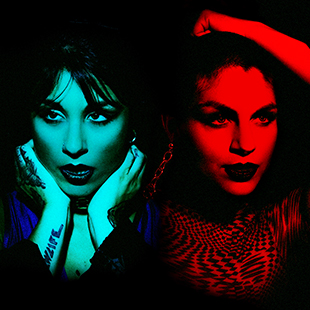