Powerful, intense, coherent. 'Shake, Shook, Shaken' is the very special odyssey of The Dø. Olivia Merilahti and Dan Levy always favored risk-taking rather than comfort and compromise. With this third album, the Franco-Finnish duo offers a radical change - a futuristic turn carried along by a syncopated electronic beat.

After the wonderfully accidental 'A Mouthful' (2008) and the organically experimental 'Both Ways Open Jaws' (2011), 'Shake, Shook, Shaken' responds with a new requirement elevated as "dogma" in the opinion of those concerned: Dan and Olivia deliberately opted out of acoustic instruments to focus on synthetic dance sounds and percussion.
"When we started writing these songs, they said, "we used only a laptop and a keyboard. We quickly became obsessed with this set-up; this form of minimalism banning 'real' instruments to the point of creating a new work ethic: guitars, which had been almost over-used previously, have intentionally been set aside. Our aim with 'Shake, Shook, Shaken' was to take ownership of the sounds that had previously been undervalued, while going with a more pop aesthetic."

From their studio a pastoral 18th-century water tower, they conducted their research. Between self-restraint and purity lies transcendence. Says Dan, "We were very hard on ourselves. Once something became too convoluted, we would chop it down with an ax. We wanted a very epic album, with elements of heroism, comedy and manga. An album with superheroes. It wasn't about sounding contemplative or naturalistic. I have never been so affected by synthetic sounds in the middle of those fields."

Olivia also talks about her family roots when it comes to explaining another founding principle of 'Shake, Shook, Shaken.'
"In Finland, there is the 'Sisu,' a sense of resilience and bravery that is a common, ancestral value to the Finns. Whatever happens, we don't let go, we keep moving on, we never feel sorry for ourselves.
This followed us while writing the album. We wanted to make a luminous record to reach as many people as possible, without having it fall in on itself."
"I don't mind where I land as long as I'm in trustful hands," she says in the second song on the album. "My lyrics are more or less surreal poems, but I don't mind being very down to earth sometimes, like in this song, 'Trustful Hands.' I talk a lot about finding oneself in chaos, which can also be comfortable, and knowing how to live with it."

'Shake, Shook, Shaken' has its share of unifying hymns, from the introductory 'Keep Your Lips Sealed' and the solemn 'A Mess Like This', to the vibrant 'Despair, Hangover & Ecstasy' and the appropriately named 'Miracles (Back in Time)' - considered by the duo as a "pillar" of these twelve songs ("by listening, we knew we were finally on the right track"). The music of The Dø takes its audience between military rhythms ('Going Through Walls'), tribal vibes and cosmic depths while Olivia's voice takes on a new dimension. "Just as we wanted to create short fragments without chitchat," she interprets, "I wanted to avoid vocal acrobatics. The message should be hitting you from the start to the finish."
Abundant, emotionally strong, full of surprises and other sonic innovations, 'Shake, Shook, Shaken' is not inferior in strength to the duo's previous albums. "We wanted to get it right, but through innovations in instrumentation," says Dan. "Throughout the year-long development of this record, we listened to a lot of hip-hop, club music and aggressive techno - these are the sounds that are the most innovative at the moment. It all changes very quickly, it's very challenging. I am fascinated by the complete freedom of a band like Die Antwoord, and also how Beyonce and Kanye West are revolutionizing popular music, from the highest peaks of mainstream music."

True to what they have always been, Olivia and Dan have once again worked in an almost self-sufficient process, only supported additionally by the mixing engineer Fab Dupont. "He was able to create space in our rich, dense compositions, polishing and providing this clarity that we aimed for. It was the only help from outside that we allowed ourselves, but it was crucial."

Olivia and Dan succeed in making music both cerebral and visceral, building bridges between the present and the future. Varied in its approach and essentially uncompromising, 'Shake, Shook, Shaken' lays the foundation for unprecedented experimentation to conquer unexplored territories. 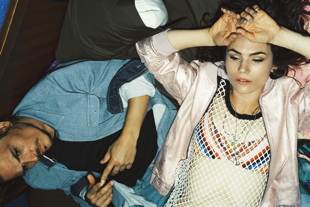