In the midst of all their other contributions to society, The Vandals are taking the time to get back on the road and release a collection of hidden gems that show The Vandals doing what they do best, not giving a f**k.

The 'BBC Sessions And Other Polished Turds' has The Vandals admitting to the rest of the world that not only are they BBC Approved in the U.K. with the best of those sessions offered here as proof, but also that the stuff they have lying around that has not seen the light of day is probably better than their serious efforts at making brand new studio albums. They have Made 11 or 12 of those. Do you really need another one right now? The Vandals didnt think so.

'The BBC Sessions' contains unreleased performances recorded for the British Broadcasting Corporations Radio One during a period representing The Vandals peek of popularity in the U.K. selling out venues like the Astoria in London and appearing on covers of glossy magazines instead of inside stapled together black and white crappy ones like they have always excelled at in the U.S. Some Vandals standards like 'My Neck And My Back' are included along side cover songs like ZZ Tops 'Mexican Blackbird.'

In the 'Polished Turds' this CD represents some of The Vandals absolute best work with rare original material like 'Gange The World With My Hocky Stick.' This song appeared on a limited 7 inch produced by Fat City Magazine as the grand prize winning song in a world wide search to find the worlds best hockey song..in the world!!!

Cover songs on the CD include the two best Ramones tribute efforts you will ever hear. They sound like the band had absolutely no respect for the originals, yet some how kicked out versions way better than those you have heard by suck ups. Speaking of no respect for the originals; when The Vandals were asked to be part of an Alice Cooper tribute album, they raced to claim his worst song ever; 'Poison!' Written by Desmond Child, no less! The Vandals gave it the treatment it deserved.

Have you heard their version of 'Heigh Ho'? Of course you havent. Its only been released in Japan. Please to enjoy. Its insane and you arent ready for it. The CD is rounded out with gems like an unreleased 2004 version of the 1982 classic Vandals tune 'Urban Struggle', and the re-mix of 'Kick-it' with Emmy winning comedian Bob Odenkirk on the vocals. These polished turds will smell great to anyone!

What do these guys do when they are not on the road? Its unlike any band out there and that is why performances and releases are so rare for the quartet. Lets take a look:

Joe Escalante has spent the last year on the air every morning from 6 AM to 10 AM as the morning drive time host at legendary Indie 103.1 FM in Los Angeles. Rolling Stone Magazine labeled Indie the coolest radio station in America.

Warren will be on tour most of the year as guitarist for Gwen Stefani.

Josh spent most of last year as drummer for Sting. He will spend most of this year as the drummer for Nine Inch Nails. He still remains the permanent drummer of DEVO.

Dave sells booze. You got a problem with that?

Touring has become rather selective with the above listed activities to juggle. These days you are more likely to see the band in Sadr City outside of Bahgdad, or in Bagram, Afghanistan playing for the troops, or at a festival in Japan than locally at the House of Blues, but this summer you can catch The Vandals on portions of the Vans Warped Tour. Dont miss it! 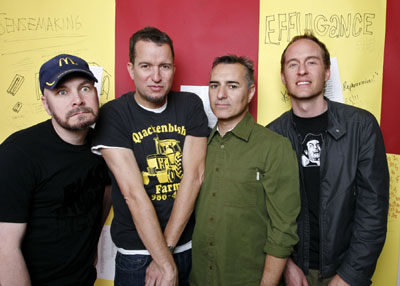