Mike Clattenburg, John Paul Tremblay and Robb Wells met in high school in the late '80s. The three always had a strange and bizarre sense of humour, always playing practical jokes on people and getting into trouble. Clattenburg was the champion of practical jokes and used these situations to study people's behaviours.

Clattenburg started working for a local community cable channel and had his own show called 'That Damn Cable Show' giving him a medium to express his off-the-wall sense or humour. Tremblay and Wells were huge fans of his sketch comedy and it gave them the bug to want to get in front of the camera as well. Clattenburg always involved his friends when he was starting out and suggested that Tremblay and Wells start experimenting with a video camera while passing the time in PEI running a pizza restaurant. The skits were crude and the sound was horrible, but it did serve as a good tool to improve on ideas and hone in on their acting abilities.

On a couple occasions Clattenburg, Tremblay, and Wells managed to get together and experiment with Clattenburg behind the lens. Once in a while they'd show the tapes to friends and although the friends thought they were insane, they did genuinely laugh at some of the material and from that point on they all had the entertainment bug.

It was now time to get serious so the three set out to make a short film for the Atlantic Film Festival. With no money, Tremblay travelling from PEI and Wells from Bangor, Maine, it was a long, tedious process. The payoff was the self-financed feature 'One Last Shot', filmed and directed by Clattenburg. He was presented the best cinematography award for his efforts while John Dunsworth received the best male actor for his initial portrayal of Mr. Lahey. For their roles in the film Tremblay and Wells were also showing early traits of 'Ricky and Julian'. After seeing the audiences' reaction Clattenburg, Wells and Tremblay immediately started talking about a new project. Busy working other jobs, they got together to brainstorm and eventually decided to shoot a mockumentary set in trailer park. With little money and a small crew, the film 'Trailer Park Boys' was shot. While doing sound on the film, Mike Smith' entered the mix and the loveable character 'Bubbles' was born.

The film premiered at the Atlantic Film Festival and in attendance that night was Producer / Actor Barrie Dunn who immediately thought the movie and its characters would be a great premise for a television series. The next day Dunn drove to Sydney, Cape Breton to meet with Clattenburg who was there directing episodes of 'Pit Pony' for CBC. That night, over diet colas at Smooth Herman's, Dunn talked to Clattenburg about the possibility of making 'Trailer Park Boys' into a television series. Dunn, Clattenburg, Wells and Tremblay collaborated on a proposal.

Dunn and Clattenburg flew to Toronto for initial meetings but had no luck. Driving down Eglinton Avenue discouraged, hungry and tired, they decided to pitch the idea to Showcase. The problem was they didn't have an appointment with anybody and they had to fly back to Halifax the next day. They finally got in touch with Laura Michalchyshyn, Senior Vice President of Programming at Showcase, who probably now regrets answering her phone that day. Michalchyshyn, being the astute woman that she is, saw the merit in a low-budget, edgy mockumentary about dope-smoking, hard-talking 'Trailer Park Boys'.
She kindly agreed to see the two and listened to their pitch. Shortly after, Michalchyshyn called Dunn to tell him Showcase would be interested in a first season of 'Trailer Park Boys' episodes.

But they didn't stop there and proceeded to get Mike Volpe drunk one night and forced him into a partnership to produce the series. The three also managed to sober up long enough to collaborate on other projects.
Although they all still live on hot dogs, macaroni & cheese and chicken fingers, they have never been happier. 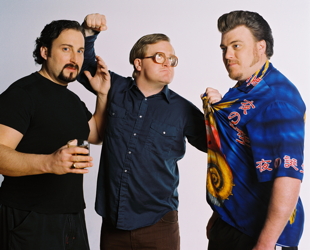