Her debut EP 'Lust For Dust' was written and mostly recorded at her home, with Capri co-producing everything alongside collaborators Sammy Yamaha and Simon Byrt (Pixx, Babeheaven).

Her debut single, 'He Can Be Your Lady' released 11.10.18 was described by Clash Magazine as a "remarkable post-disco jewel... de-constructing gender norms has rarely been so infectious."

Live, Capri has made the striking decision to dispense with a live band and perform her entire set karaoke. "For me, every time you play live as an artist, you're kind of covering yourself anyway. Always chasing a version of that first moment of inspiration, or whatever, when you first come up with the idea for a song. So, I wanted to look at that idea, that tension in trying to produce a sincere performance of a song every time you sing it. It just seemed like an interesting thing to do to make that explicit by literally singing cover versions of my own songs every time I perform. I also like the freedom of not having to play an instrument; it means I can really do the kind of moves I want to, and get down on my knees and so on if I'm feeling really emotional at a particular point in the set. It's kind of like X Factor when I perform - I have a smoke machine and really try to live the moment - except without much of an audience." 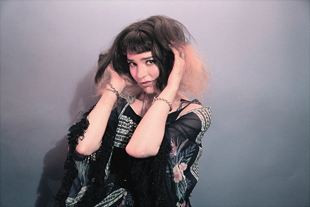