The career of an artist is a book being written in real time - or at least that's the way Wretch 32 sees it: each album is a new chapter. And when all is said and done, we'll be able to listen back and experience their life story through their work. Having already claimed his place amongst the UK's elite, his fifth chapter, 'Upon Reflection', finds him settled and meditative, with the spirit of a winner who has the confidence to share his wisdom with those that might take up his mantle. It's from this head space, with over a decade of experience, that he's able to push himself and his creativity to new levels, with his pen game as sharp as ever, and plenty of chapters still to be written.

Raised in the high rises of Tottenham's Tiverton Estate, Wretch 32, born Jermaine Scott, grew up around his parents' Jamaican culture and Reggae music before finding grime and gaining infamy as a seminal figure in Combination Chain Gang and The Movement, the latter of which included fellow veterans Ghetts, Scorcher, Mercston and Devlin.
He'd soon fuse other genres, including rap, reggae and R&B, into his sound, to create music that would appeal to the masses while demanding the respect of the UK rap scene. Wretch has carved out a unique space for himself within UK music, with four acclaimed studio albums and cult mixtapes under his belt, as well as top ten singles including '6 Words', 'Traktor', 'Unorthodox', 'Blackout' and the number one hit 'Don't Go'.

"I think now is where I've got to show bravery," he says.
"Because the game is in a transition and it seems like people are possibly preferring quantity over quality. When you're someone who represents quality and an element of class, I don't actually think that will go out of fashion." He admits that amid the current fast food diet, of disposable rap music streaming into our ears on demand, the body of work that he's preparing to release might be considered to be unorthodox. But he remains firmly rooted in his belief that his contribution to the culture will never go out of style. "I put my artistic beliefs before everything," he states firmly.

While Wretch has proved his abilities as a technical MC time and again, on platforms like Fire In The Booth where he's debated as one of the best of all time, he focusses on taking an economic approach to songwriting with 'Upon Reflection'. While crafting the album he spent a lot of time listening to the likes of James Blake and SZA, as well as a lot of afrobeat records. "I learn more from singers than I do rappers," he explains. "I think in rap we've been afraid of space, we've been afraid of gaps. But singers, they'll find a way of wording a paragraph in a sentence, and it has the same effect."

This line of thinking stems from a piece of advice he was given many years ago, but took so much longer to fully absorb. In 2009 Tyrone Hinds, formerly manager of Ms Dynamite, told Wretch that he says a lot, but that he uses a lot of words to do so, and that he'd reach the next chapter of his career once he learned to do so with less. While he was originally confused by the conversation, he admits that it's completely transformed his creative process, and is amongst the best advice he's ever been given. Now he painstakingly crafts his songs to cut the emotion of a full verse into one bar, and as a result his latest collection is drenched with mood and feeling.

The core of the new 12 track album was written and recorded in Los Angeles during a three week trip to visit his long time producers Sons Of Sonics' Mikey Muzik and Mo-Samuels. Not wanting his creative process to be influenced by the city, he woke up each morning, ate breakfast, caught an Uber to the studio where he'd work to exhaustion before returning to his hotel. "Effectively I could have been anywhere," he admits. "I had to just remove myself from the wide roads and the palm trees, and just stay doing what I'm supposed to be doing."

He took the flight to L.A. as soon as he'd landed on the title 'Upon Reflection', which informed the direction of the rest of the record.
While the previous LP, 'FR32', celebrated freedom and a transitional period in his life, this one finds him in a place of settlement. "The palate, the texture, the mood; it just feels like a much more settled person," he says. "Once you're going from your change and your transformation it's easy to try and understand it, and to second guess things. But I think once you actually plant your feed on the ground it's easier to speak about it."

Rather than delivering his thoughts through a linear narrative, the record takes on a more engaging and thoughtful form; beginning with an update on Wretch's current mindset, before delving into the past and unearthing the context that lead him to his present. A versatile and warm collection, he hits the ground running with the self-assured swagger of 'Winning', then moves towards the leftfield auto-tune soaked ballad 'Visiting Hours', immerses listeners into the pensive reflection of the title track, and adds lighter tones such as 'Spin Around'.

The album is preceded by lead single 'Mummy's Boy' which sees Wretch redefining a term that's followed him throughout his life. "In a Caribbean household, 'Mummy's Boy', is almost like the worst insult you can give a kid," explains Wretch. "I was the mummy's boy, with two older sisters and two younger sisters. Me, I take power in it, because the mummy's boy became the man of the house; the head of the family. So it's just something that has a negative connotation can be flipped into a bigger positive."

Always one to speak out about his beliefs, it's also an opportunity for Wretch to celebrate the women in his life: "The strongest people I've ever known in my life are always women. The strongest woman I've ever known is my grandmother. My mum with five kids, no partner, having to work to pay for all of our lunch money, all of those uniforms in September, all of those school trips, dinners every night: no one pats her on the back. I feel like women need the words of encouragement, and it's important to see a man giving it as well."

At the end of the album, Wretch reunites with previous collaborators and rising stars, Avelino and Knucks, for 'The Baton' which sees him embracing the future. "It's me speaking about the end of my career and the birth of theirs," he explains. "It's called 'The Baton' because it's like when I'm ready to pass the baton, even though you're going to have to race me until I physically cannot move, I'm going to pass that baton to you."

While he's always been somewhat of a people's champ, Wretch 32 believes that once success was incorporated into his journey, he became undeniable as one of the countries greatest, and that allowed him the liberation of creative freedom. Regardless of what else is happening on the musical landscape his new record speaks for itself, and nobody puts more pressure on Wretch than Wretch, to create the best music that he can. "That's always the only agenda," he explains. "I want people to respect quality and class, and understand that this isn't something that will go out of fashion, regardless of the times.
Regardless if ripped jeans or dyed jeans are the top seller, there's still a place for suits. I just always want to add that element of growth and maturity. I love the fact that it's the fifth album and I'm still here, and the fact that people still want to listen; I think that's testament to a lot of things." 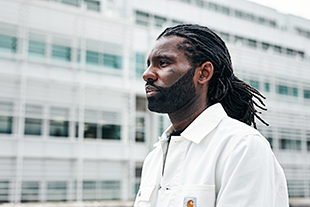