“The band has teeth and they bite. Derek uses words & melody to blend up a cocktail of imagination & harmony with guts. The production kicks it up, loud and clear for all to hear, the band tears through numbers like it's stage-time all the time. It's rock'n'roll with soul.” -- Stephen Perkins, Jane's Addiction

In an era where algorithms decide what’s on your screen, it’s easy to feel like the people behind the glass are designed for you - but what if instead they were destined for you? For the members of Classless Act, a bright new band whose members are from all over the globe -- Hawaii, Los Angeles, Buenos Aires,, Argentina, Dallas -- this seems to be the case.

Formed in 2018 and consisting of five former strangers who met via social media, Classless Act -- Derek Day/vocals, Dane Pieper/guitar, Griffin Tucker/guitar, Franco Gravante/bass, and Chuck McKissock/drums -- quickly formed a brotherhood bonded through a series of double-taps, DM’s, and tagged comments. Their music echoes the hallmarks of previous generations - anthemic rhythms, shreddy guitars, soaring vocals - but punches its way into the future with clever arrangements, sharp musicianship, and proficient songwriting; and, according to one writer, "...enough energy to power a city." Having been invited to join the line-up on The Stadium Tour, this summer's 36-date, co-headline trek with Motley Crue and Def Leppard, Classless Act is well on its way to achieving its collective goal - being a next-generation defining act.

Classless Act has been in the studio with world-class producers who have helped craft hits for the likes of The Red Hot Chili Peppers, Metallica, Soundgarden, and The White Stripes. And the band recently landed a deal with Better Noise Music, Billboard’s #1 rock label for 2021, and will see the release of its debut album, Welcome To The Show, on June 24. Their electric debut single “Give It To Me” perfectly represents the group’s deft ability to take vintage tone and inject it with a new, modern energy, bringing life back to a time-honored rock n roll sound. And live in concert, as one reviewer put it, ,Classless Act hit the stage at 100 miles per hour, and they never slowed down during their set.”

What stands out about Classless Act is their cohesiveness as a group, despite each member having roots in vastly different walks of life, both culturally and physically. That singular vision, embedded with a diverse sense of self, is evident on their forthcoming debut album. On each track, their talent and honesty ring through, as does the group’s respect for one other as artists, giving them space to make music that’s timeless. Bonded by the unique connections of the digital age, and further connected by creating art together, the result is a singular sound that is destined to be heard by all. 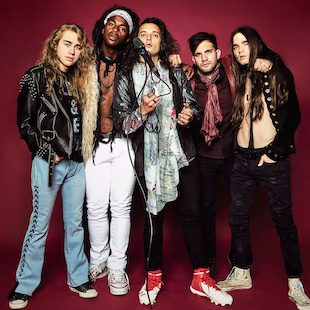