Soul singer-songwriter Amahla has had an exceptional 2019, entering it as the winner of the PRS Lynsey De Paul Prize for outstanding emerging female songwriters, and ending it with over 1 million streams, two sold out headline shows and with critical acclaim for her distinctive voice and songwriting.

In February '19 Amahla introduced her politically-tinged contemporary soul sound with her debut EP 'Consider This' which was met with critical acclaim for its addressing of social issues, bold songwriting and outstanding vocal delivery, receiving impressive features and reviews from, Clash Magazine, Complex, Earmilk, The Line of Best Fit, Bandcamp and more.

"Her lyrics offer insightful, vital reflections on the present, uncertain cultural and socio-political clime, intertwined with personal narratives and memories" - London In Stereo

With a focus on live instrumentation Amahla is a commanding performer spending 2019 playing The Jazz Cafe, Roundhouse, The Royal Albert Hall, The Great Escape Festival, Cheltenham Jazz Festival, XOYO and Village Underground; in addition to selling out two of her three headline shows at The Roundhouse, St Pancras Old Church and The Lexington.

A talented songwriter in 2019 Amahla also wrote and featured on the soulful track 'In The Moment' with Drum and Bass duo Brookes Brothers which saw Amahla's first support from Spotify on their New Music Friday UK playlist.

Amahla's breaktaking latest single 'Apathy' explores the privilege of being able to "tune out" of world politics. Unafraid to explore uncomfortable issues and with a voice that commands attention Amahla's talent is clearly reflected by her ambition, to be one of the best vocalists, songwriters and entertainers of her generation.

Amahla is currently being featured by o2 Music and Madison Square Gardens London as one of the UK's best new live acts, Amahla is set for an exciting 2020.

"She possesses the vocal ability to knock your ears clean off your head.. but instead puts all the focus and effort into the subject matter, using her singing ability as a vehicle for her stories" - Earmilk

"The Hackney riser has a deeply intelligent approach to songwriting, one that merges the personal and the political" - Clash Magazine 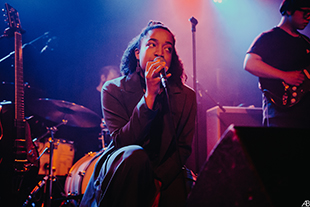