Beach Slang are a band who have garnered a lot of attention considering that they've only released two 7-inches, 2014's 'Cheap Thrills On A Dead End Street' and its companion 'Who Would Ever Want Something So Broken?'
Refreshingly this Philadelphia-based act have built their hype the old-fashioned way, without any gimmicks or marketing teams, which makes sense when you consider that frontman and writer James Alex cut his teeth in the Pennsylvania pop-punk act Weston while drummer JP Flexner and bassist Ed McNulty also play in buzzed about projects such as Ex-Friends and Crybaby. However there's something indefinable about Beach Slang's music that evokes the spirit of punk and juxtaposes it into something that's as brutally honest as it is infectiously catchy.

"When this whole thing started it was like, 'Alright, i'm going to get to hear my sappy little songs played loud and interact with other human beings again,'" the admittedly shy Alex says looking back on Beach Slang's existence. "Then one day this really sweet explosion happened and Beach Slang became a thing that mattered to people." As anyone who has seen Beach Slang live can attest, it matters to people a lot including the group's peers like Cursive who hand-selected Beach Slang to open for them on their upcoming headlining tour. "I used to skate with this really sweet girl who would refer to the way I spoke as 'beach slang' and I've never shaken that off," Alex continues. "The really soft parts of your childhood, I suppose, have a way of sticking around. I like that."

That feeling of youth and vulnerability also lie at the core of Beach Slang's music, which is part punk, part pop and all catharsis. It references the ghosts of The Replacements but keeps one foot firmly rooted in the present. It's fun and it's serious. It's sad but it isn't.
It's Beach Slang. Enjoy it and look out for the band's debut full-length later this year because they're still just getting started. 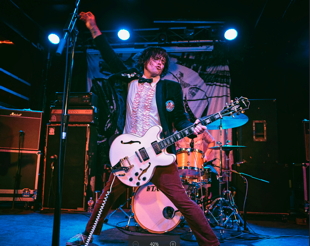