Even in the worst circumstances, love is a bright sound. It is comprised of major chords and loosened by reverb. It is an emotion that radiates warmth, light and nostalgia despite its laid back beat. It is appropriate, then, that Choir Vandals's debut full-length album explores the subject of love, considering its twelve bright, easy songs, each catchier and more layered than the last. Its title, 'Dark Glow', suits it, too, but not because of its luminous connotations. Instead, the oxymoron fits along with what it implies about love.

It is the songs on 'Dark Glow' - the music and melodies- that feel so bright. And 'Hard to Hold' is among the brightest with its gem-like chords and drumbeat like boulders tumbling down a mountain. Singer and guitarist Austin McCutchen adds his dazed voice to the display- slurs his words, bends his voice, flips into a falsetto- adding serenity to an already lazy summer song. These qualities appear on so much of 'Dark Glow', though each song has a unique personality. 'A Place to Hide', the album's opener, is a bike ride to the park, the mid-morning sun flickering through the broad leaves overhead, while 'White Gloves' is a drive home at dusk, windows rolled down and singing through a hoarse throat.

Of course, as the album's title implies, just because these are bright love songs does not mean that there are not some shadows, too. The title 'Dark Glow' is taken from the song 'Head in the Oven', another shimmering, spinning song; though its music expresses love's brightness, the lyrics paint a more conflicted picture: "Dizzy when the feeling's right," McCutchen croons, "tripped up and tried to dance in perfect time / got lost inside the record player's mind, spinning around with no cover design."
In these and other lines throughout the record, the other side of love-the darker, more painful, complex side-is on full display. It is on the mesmerizing "Mother" where McCutchen sings, "Mother, I know you're battling demons / don't have to keep it a secret / I'll fight them off," and on 'Sequencer', a plodding, whirling song that speaks of lost love. "Am I over it?" McCutchen sings, his voice lost in a tempest of guitars and swelling cymbals. "How could it be? / I've sinking into the dark of night avoiding everything that's bright, covering up the light. / Am I holding up? / I guess I'm not holding up."
Love may be a bright sound, but 'Dark Glow' reminds us to listen to what it is really saying-to not be distracted by mere beauty; to heed its obvious advice. Here, Choir Vandal's first full-length reveals more than musical maturity, more than a band that has found its lush, layered sound; it also displays personal maturity and wisdom-the sort of truth that only experience can provide. 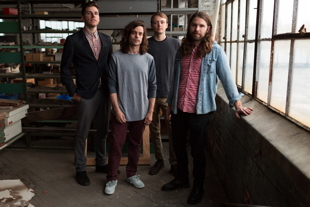