One afternoon two years ago, Danny L Harle composed a song to play in his DJ set; a huge fan of 1990s dance tracks such as Haddaway's 'What Is Love' and Corona's 'Rhythm Is A Dancer', he wanted a song of his own to play alongside them. The result was 'Broken Flowers': both a paean to the past, and the sound of something modern.

Now 'Broken Flowers' is reappearing, lightly polished, to head up Harle's new EP, a statement of intent from the London-born 25-year old composer and producer.

The new EP is one of the first full releases under the PC Music label deal recently struck with Columbia Records. Harle has long been affiliated to the label and works regularly with his friend Alex 'A. G.' Cook, PC Music's founder.

With its electronic sheen and avant-pop sensibilities, 'Broken Flowers' is certainly a feather in PC Music's cap. But the EP is also progress for a distinctly individual artist. "Pop music in itself is super-crazy," says Harle."It's on the brink of insanity. And what I have always been hoping to do is just push it that little bit further, to complete insanity."

The EP is a first step in that direction. 'Broken Flowers' is followed by 'Forever', which Harle considers its rival in melody and impact; then comes 'Without You', a more complex construction, less up-tempo. The final track is 'Awake For Hours', a heady rework of 'Broken Flowers'.

For Harle, Pop is the genre which "makes so much sense" in this day and age, more than any other he has worked in. It's been a meandering journey up to this conclusion. His first musical instrument was the slap bass: this set him on a path taking in funk jams, eventually playing on dinner cruises; then getting into experimental jazz; before embarking on a degree in music at Goldsmiths.

This feels very much like PC Music's time. Ever since Harle and Cook, friends at school, met again at Goldsmiths, and started collaborating on their Dux Content project, they felt they were onto something; they just needed people to understand the sounds they were producing. "We were very conscious that we liked what we were doing." But the stuff they were into - overly artificial, darkly humorous - "seemed random and stupid. And it's still alien to a lot of people, but at least now there's a cultural basis to it that people can understand."

Harle used to worry that his music and his identity didn't match up - that people might only dwell on the baleful tone of 'Broken Flowers', for instance, and not the other ideas within - but senses that his listeners do now. There's always a push and a pull between something seductive, and something strange.

You can understand that a bit more by looking at the vocalists Harle uses on his EP. Each of the singers are friends, or rather friends of his girlfriend ("it's all through her, to be honest"). Using non-professional singers allows for a bit more personality, says Harle, a certain roughness, than your seasoned studio singer might provide. But then he has sped each vocal up, to different degrees to create an uncanny and occasionally unsettling sound. "It represents something that the audience know, but it's reversed too - an alternative reality."

Harle's aims are very much based in the here and now. The EP is a calling card for the producer, who is eager to work with other pop artists (his ambitions include writing more R&B and hip-hop, and also computer game development, their soundtracks included). He doesn't think his taste for the uncanny would put people off - far from it.

"I could make something that is completely bonkers, but still give a way in, musically. I could have Nicki Minaj on it, but do something completely unusual. It's totally possible." Not for the first time, surely not the last, Harle makes a strange type of sense. 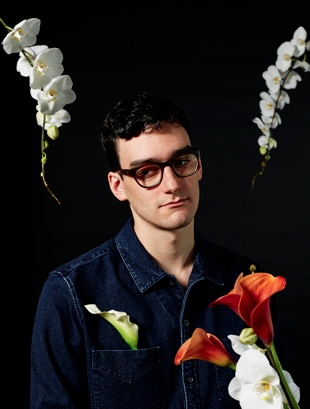