Growing up in a Kent village as one of three and a tomboy at heart, instead of doing hair with her sister, Déyyess would be found in the back garden playing football with her older brother.

At the age of seven she started playing competitively for the local primary school team that her dad managed, becoming top goal scorer alongside her peers who were all ten year old boys. "I used to turn up to these football days and the other teams, all boys, would shout 'Ahhhh you've got a girl on your team'" she laughs. "And all the boys on my team would yell back, 'Yeah, but she's better than you mate.'"

By the age of 12 she discovered Lady Gaga and her life changed. "I became a little monster!" she asserts, still with a glint in her eye. "Her message is it doesn't matter who you are, or where you come from, what you like, what you don't like or what people say to you, you can be whoever you want to be."

Armed with this message she started a long conversation with Mum about her burgeoning dreams and ambitions to move to New York, write pop songs and become a star. A compromise was reached and Déyyess began piano lessons the following week.

However, Lady Gaga provided more than just musical inspiration, she gave Déyyess the confidence to be honest about her sexuality at 14.
"I felt so strongly about certain aspects in life, it was a turning point. Lady Gaga is a huge supporter of the LGBTQ+ community. I'd watch all her interviews. I remember the one really poignant speech that changed me was the Don't Ask, Don't Tell campaign. It held a really strong message and the way she was speaking, her body language, it reinforced for me that this was how life should be."

Déyyess counts her Mum as another strong figure of inspiration in her life, and a constant champion. "I didn't need to talk about my sexuality to my Mum" she shrugs. "I just brought girls home."

While at school Déyyess was scouted to play for Arsenal Girls but she turned down the opportunity to concentrate on her music. "I lost sleep turning that down, but as much as I love it, football just wasn't a career I wanted to pursue. I didn't feel as much passion for it as I do for my music. With music you can give something that comes directly from you, a part of your own story to give to others. You have time alone to think honestly about yourself and things you've experienced."

Her music details real life relationships and experiences with a tilted pop sensibility that sits somewhere between the narratives of King Princess and the imagination of Kate Bush. "When I'm in something, I'm all in. My last relationship was the same. She was the first girl I ever loved, and she knew that. I think that's probably why she broke up with me. Most of my songs are about her. I'm literally just over it, but if I didn't have that heartbreak, I don't think I'd be here. I'm so glad that happened to me."

With a string of evocative and insatiably hook-fuelled new songs and an optimistic outlook, Déyyess is ready to take on society in the couture footsteps of her idol. "Women's rights and LGBTQ+ rights are really important right now. It's important to recognise who you are and who you want to be, and to force change in those gender norms."

This monster ain't so little anymore. 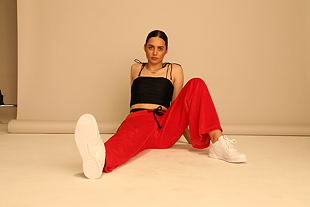