It's not for anyone else to decide what other young men and women should get up to in the sanctity of their own bedrooms. That said, it's heartening to know that not everyone using the term "bedroom band" is a lazy person making bad excuses for a tossed off record.

For the last three years, Django Django have been busy doing great things in the East London bedroom slept in by their drummer, producer and de facto leader David Maclean. The result of those great things is a great self-titled debut record.

"Time gives you options, and we had plenty of that," says Vincent Neff, the singer and guitarist who - along with bassist Jimmy Dixon and synth operator Tommy Grace - completes Django Django.

"There was no pressure on us from anyone to go away with a producer and come back two weeks later with an album," explains Maclean. "Maybe next time there will be some svengali figure banging his fists on a desk demanding hits, but we've had the luxury to figure out what we wanted to do and how we wanted to do it."

The quartet, who met at art school in Edinburgh, first came to peoples' attentions after a gradual migration to London a couple of years back.
2009's double A-side single 'Storm' / 'Love's Dart' laid the blueprint for a confident, adventurous and psychedelically-bruised strain of art-rock that melds intangible electronic flourishes to the visceral rub of live instrumentation.

The time since has been spent holed away, expanding upon that blueprint, seeing where they can push it. The impression one gets of Django Django is of a band laying down the first, meticulously measured borders on some vast map of a world that only they are privy to.

Correspondent to that, each track is like its own nation of harmonies, rhythms and textures. "We didn't put much conscious thought into making it sound like an album -we thought we'd let any similarities between the songs come out by themselves," explains Tommy.

What that means in practice is the swooning, bucolic Beach Boy-isms of opening track 'Hail Bop' and the sterner, questing Bo Diddley beat guitars of 'Life's A Beach'. The industrious, go-getting tattoo verses of 'Firewater' and the sleepy cowboy sighs of 'Silver Rays'. 'Default' and 'Waveforms' are future singles. The former sounds like an uprising in a Mexican gun factory. "Music's so mad and widespread and varied, that eclecticism's the only way to be for us," reasons Maclean. "That said, I think you can draw a line through all the music we're into. It's about creativity and experimentation and the quest to find a new sound."

Amid all the diverse moods and ideas of Django Django (all there, perhaps, as the imagination wanders to stave off bedroom boredom?)it's a lyric from 'Silver Rays" that most capably sums up its parent album.
"We venture out into the great uncharted," sings Neff, "go far away from any beaten track... Enjoy it now before it's far departed, you know that once it's gone that there'll be no way back." The lyrics can be read as a desire to explore first, and a tribute to what Dixon calls their decision to "stick to their guns" when outside forces tried to convince them to forget everything they'd seen. "A lot of people expected us to ditch our recordings and start all over again, but that was never something we wanted to do. It's great to have a body of work - something you can point to, and say this is the story so far." If that's true, then Django Django's story looks set to be a long and compelling one. By banging together their thirst for adventure and their exacting high standards, they've produced an album that seems to have everything, but on which everything never seems too much.

Time to get out of the bedroom now, and let playtime begin. 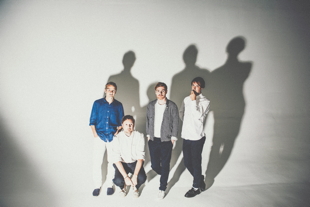