It's said that Australians are some of the most laid-back people around, always cool, calm and collected. For the most part, DMA'S fit that bill. The Sydney trio have gone from writing and recording in their bedrooms to living their dream of spending most of the last 12 months almost permanently on the other side of the world, playing packed out gigs to rabid fans, but their attitude is much the same as you imagine it would have been back when they formed in 2012 - taking whatever comes their way with a satisfied shrug.

That's not to say joint songwriters Johnny Took, Matt Mason (guitarists) and Tommy O'Dell (singer) aren't as exciting as hell. On record, O'Dell's vocals surge with power and rousing, raw emotion, while the group's live shows feel like one big, anthemic high. The latter is especially impressive given the trio didn't really intend to play live.
"We were just hanging out and writing songs," Took explains matter-of-factly of their origins. O'Dell agrees: "We never really thought we were going to be much of a live band, to be honest. It was more of a recording project, but we got signed with our Australian label [I Oh You] and they said we should play."

DMA'S was far from the three's first experience of playing in a band. They'd each grown up playing instruments from a young age and had played in various groups together before, including a bluegrass band that Mason and Took were once part of. But, for O'Dell, this was an opportunity to try something new - singing. Previously a drummer, he had never heard his own voice recorded before. In keeping with DMA'S easy-going approach, it all happened completely organically - the soon-to-be-frontman was hanging out in Took's room, where a mic was set up ready to record a song. O'Dell decided to give it a try himself, stepped up and sang. The rest, as they say, is history.

"It seemed pretty seamless," Took reflects now, "He knew he could sing in tune, but he'd never heard his voice like that." "I was surprised," agrees O'Dell, the shyer member of the band. "It did take a few gigs to get used to [being the main focus], but I actually find singing easier than drumming now. I just see singing as just a job that needs doing like every other instrument. I don't really see it as a special role."

With O'Dell now front and centre, and no bassist or drummer in their line-up, the group had to find more members to help them recreate their bedroom compositions on stage. "We got some mates in to play some bass and drums and extra guitars just to hear what [the songs] sounded like," remembers Took, adding with a laugh, "that was pretty weird at the time as well!"

Soon, a record arrived in the bedroom recording of 'Delete' in Australia, the stripped-back acoustic-led ballad that first made people even in the UK, from NME to BBC Radio 1, sit up and pay attention. Then came record deals across the world including a UK contract with the influential Infectious, the label behind alt-J, Drenge, fellow Aussies The Temper Trap and more. May 2015 saw something a little more fleshed-out arrive on British shores in the form of a self-titled EP that fizzed with searing, noisy guitars and softer, more tender moments.
It was a thrilling taste of what a full-length record could hold bolstered by incendiary sets at festivals like The Great Escape, Latitude, Splendour in the Grass and Reading & Leeds with packed crowds in sweaty tents! Their first UK headline show was a sold out 100 Club in London and two UK tours have followed since bringing new fans won over by their exciting live sets.

All three had experience of touring, albeit only in Australia, and writing and recording before DMA'S. But the one thing that had eluded O'Dell was making an album. His driving ambition when he first got involved with the band was to rectify that as soon as possible.
"That's why Johnny and I wrote as many songs as we could early on," he explains. "We wanted to have a big list to choose from [so we could make] a strong record."

'Hills End' is that dream come to fruition, a collection of the three friends' endeavours over the past three years and, sometimes, beyond. It's a record that takes each individual's own influences - folk artists like Dylan for Took, "American guitar bands from the '90s," for Mason and English bands passed down to O'Dell by his older brother and Liverpudlian dad like The Beatles, The Stone Roses and The La's - and throws them all in one big mixing pot. 'Blown Away' is crestfallen ode to one of Took's friends leaving Australia for a new life overseas, all distant, crunching beats, stoic strings and solemnly strummed guitars.
Album opener 'Timeless', meanwhile, is a brash and blustering mix of chiming, Pixies-esque lines from Mason and an intense, barked vocal from O'Dell. 'In The Moment' lopes like O'Dell's beloved Roses, and 'Too Soon''s chorus boasts the rough and ready riffs of Nirvana's grunge glory days. It's that that makes DMA'S music so enticing - on first listen you might think you've got them pegged with the obvious, but give them another spin with a closer ear and all kinds of varied nuances start bringing themselves to light.

That's partially down to the way the band worked, layering new takes onto the foundations of old demos for most of the songs on the album.
'Blown Away' was one such track. "We took the whole session we'd started three or four years ago and hadn't looked at since, and just started recording on top of it," says Took. "Tommy played drums on it, but he only got to play the drum take for 30 seconds before we got a noise complaint from the shop downstairs. There was loads [of occasions] like that."

The trio's approach may have been fairly structured, but that didn't mean there wasn't room for the songs to mutate and develop as they went along. "We left a lot of it to be done when we were recording, so it didn't sound too contrived," Took continues. "The songs were written and had their structures, but the sounds we did on the spot. A lot of the songs hadn't been played live yet when we recorded them and we found that a fair few of them changed when we started playing them. They sounded a lot different in some cases."

'Hills End' was recorded partially in a studio in Coogee, Sydney, but "the most important" bits were done in Took's old flat at Buckland Lane. Every morning when he woke up, he'd flip the mattress against the wall, settle down to write or record, then flip it back down when it was time to sleep. He, too, was the album's main producer, foregoing someone with more knowledge to maintain the band's control over the results - with Dylan Adams taking on the engineering role. "We didn't have much engineering experience when we started, but it was all about the tunes," he explains nonchalantly. Mason adds: "I think there's something kind of nice about co-producing your first record. It's made it a really good representation of what the band are." Saying that, the band were open to suggestions when Dave 'Spike' Stent offered to mix the record, which he then did in London and LA last autumn.

DMA'S DIY ethics have been with them since the very start of the group, when they produced their own merchandise and set up their very first gig themselves in a quite unconventional venue. "There was a motorcycle store down the road," Took recalls, "so we just brought in a stage and a PA and did our first gig like that." Like everything else, they make it sound like the most natural thing in the world.

Don't let the band's chilled out attitude mask their ambition, though.
They've got plenty of it and strong ideas of what the future holds for DMA'S. On the cards is a potential move to the northern hemisphere - preferably New York or London - because they are looking to spread the word further than just their homeland.

Wasting time isn't what DMA'S are about. Their debut album might not even have been released yet, but they say they've already got enough songs written for a second album. They're a band that are constantly writing, constantly experimenting, splicing bits of old songs together to make something new like an audio Frankenstein's monster. That creative drive and curiosity combined with their unflappable outlook and sheer, undeniable talent has, in 'Hills End', already produced a body of work that's both intriguing and captivating. With gigs and festivals across the globe, from Australia's Laneway Festival to California's Coachella, DMA'S will be unstoppable in 2016. 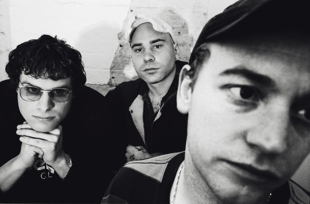