As Dylan Cartlidge knows well, sometimes even the slightest taste of success can light a fire under you, and make you hungrier for it than you knew you could be. He first arrived in Redcar at the age of 16, having been born in Stoke and spent part of his childhood with foster families before settling in North Yorkshire with his adopted mum. Having grown up listening to chart pop and rap - think Lupe Fiasco and Kid Cudi - it was where his peers would put him onto the likes of The White Stripes and Rage Against The Machine. And, it was also where he would fuse these varied influences together as the frontman of a locally-adored four-piece. His band, Bi:Lingual, were akin to heroes in their small working class town - population 36,000 - racking up regional radio plays and reaching the heats of a contest to play at Reading and Leeds Festivals. Dylan even dropped out of university to put his all into a rigorous schedule of gigs across the North of England.
Now 23, he remembers the rush of being recognised him in the street, and, later, the lows of what he describes as a "fall from grace" when they decided to give it up. "I went from planning what skill moves I was going to do at Soccer Aid and what I would say on Jools Holland to working in a call centre for a bank, and at Wetherspoons", he says. "A lot of people became distant, but it made me more aware and driven".

Fast forward a few short years, and this determination to not merely end up another "also ran" has led Dylan to set his sights not only on conquering Redcar, but the world, broadening his horizons and improving his craft. To date, he's collaborated with UK indie icon Jamie T, garnered praise from national radio tastemakers including Annie Mac and Huw Stephens, and gained a glut of UK print support, with NME simply describing his sound as "f**king brilliant". Boasting that uncanny talent for deconstructing and subverting genres that he honed in his teenage years, it's not hard to see why Dylan has drawn comparisons with everyone from Beck to Andre 3000. It's a stylistic mix that's reflected in his unique image: timelessly cool afro; Americana-inspired Hawaiian shirts; Elvis-style cuban collars. Dylan also goes against the status quo in other ways, too; at a time when the creative industries seem increasingly dominated by the wealthiest in society, he's someone who has "fought tooth and nail" to get his voice heard, even teaching himself the bass from scratch over the past few years. It was a chance mention in new music bible Record Of The Day rather than insider connections which prompted industry buzz, and an exciting, if daunting, period spent travelling from Yorkshire to London for meetings ("It felt like I was on the train to Hogwarts every time", he jokes).
Those compromises paid off, however, and he inked a deal with Glassnote (Childish Gambino, Chvrches, Phoenix) earlier this year.

But just what does a Dylan Cartlidge song sound like? On debut single 'Love Spoons' his Northern-tinged take on Atlanta rap melds with a swirling bassline and a soulful sensibility to create a positive jam that's as fresh as it is reminiscent of an era of peace and free love.
Elsewhere, Scratch Sniff sees him show off a more grungey vocal style, complemented by DIY percussion sounds - including trash can lids and slammed piano lids for "dirge and grit" - and poetic lyrics inspired by Manchester icon John Cooper Clarke ("he's dark and tongue-in-cheek'... I'd never heard anything that felt so nasty, but wasn't harsh or wasn't explicit"). Meanwhile, 'Up & Upside Down' is straight out of the Beck Hansen school of hi-energy hip-hop with a minor-key edge, with Jamie T - an artist with whom Dylan shares a social-realist outlook - providing typically sardonic delivery which only bolsters its wobbly bass and pop-soul hooks. While no two of his songs are quite the same, the constants are a boundary-squashing, scattergun approach to genre, and an ability to connect with the deeper fabric of British society in 2018. His ethos is one of "hope above adversity, though I don't want to sound preachy or like I'm trying to fix all the world's problems. If people want to listen to my music and just groove, they can, but if people relate to it that's great".
'Scratch Sniff' is a case in point; while seemingly about an epically infectious beat, it also carries an important message about mental health, with tongue-in-cheek lines like "it's only just a runny nose / I'll be ok I suppose" referring to the stiff upper lip attitude its creator still sees reflected in much of society. Meanwhile, 'The World Outside' considers the fate of "all the ones who ain't never getting out" at a time when social mobility feels more glacial than ever, and includes the true story of one of Dylan's classmates who tried to burn their school down. He never tries to force these observations, however; rather they come out via an "unconscious blob" of thoughts and feelings during the writing process. Nor do they feel somehow removed, rather heartfelt and hopeful; indeed, upcoming single 'Yellow Brick Road' is a funk-filled, irregular paean to making your dreams come true.

While staying true to himself, Dylan's style has only become more polished through collaborating with major producers, among them Grammy-nominated James Dring (Jamie T, Gorillaz) and Danger Mouse, with whom he worked on material for his upcoming debut album at the Jimi Hendrix - founded Electric Lady Studios in New York earlier this year, honing his knack for teasing out smart and subversive lyrics from his initial melodic jibber-jabber. Despite this, Dylan's humility continues to seep through. "I'm this kid who's from a place you've probably never heard of, who has a weird background and a weird musical journey.
And yet I'm being able to hold my own in my industry", he says. And, with a style that's raw and eclectic, Dylan Cartlidge is poised to do all that and much more. 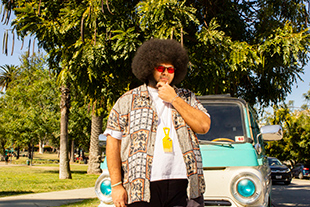