There are channels to life, specific lanes each of us can enter provided we have the correct mind set and ambition. Then, when we're locked in, things start to slide into place. At least that's what happened with twenty-five year old Ebenezer. "The energy you give out is what you get back," he explains. "We have to train ourselves to think positive, be positive, then it'll come back to us."

Ebenezer's newest release - the highly anticipated '53 Sundays', is a conceptual project inspired by his questioning of the importance of Church and God. Despite the emphasis that his environment has always been putting on religion and prayer, he felt that it's his hard work, rather than divine providence, that helped him achieve all his success.
"The overall concept of '53 Sundays' is false prophets & blind faith. Me losing faith in religion and turning to this 'get it by any means' hustler lifestyle, made me question everything I've ever believed in. I don't look to leaders to lead me. I am the master of my own fate and destiny. Growing up we never had anything, barely enough to put milk in our cereal, so we made due with water. From cousins who were supposed to be family kicking us out on the streets, thinking we need salvation, we need a miracle. We make our own miracles! '53 Sundays' is my truth."
The title track came to him during a conversation with his mum when she told him that he should go to church. He responded: "Mum, I ain't been to church in like 53 Sundays."

The project is filled with much more than just religious themes however, touching on subjects from all realms of Ebenezer's reality. The track 'Christian Dior', for instance, focuses on his desire for designer brands which, for the majority of his life, seemed to be an intangible dream whilst re-emphasising his clever word play. "I used to see everyone wearing designer and I just thought, why not me? What did I have to do to get like that? It's more of a play on words but also relating back to the concept of the entire project".

In another strand of the project, he reveals his sentimental side - 'Brother's Keeper' and 'Blasphemy' pay respect to his older brother and show appreciation to the loyalty of his ride-or-die friends.
"I have the best people by my side, they'd blast for me, get it?" he laughs. Reflective track 'What If' perfectly rounds off the project, reminiscing on everything he's been through that got him to the place he is in now. "There's so many what if's in my life, so many things that should've or could've happened but here I am."

In a few short years he's worked with the likes of Craig David, Jeremih, Ty Dolla $ign, Rejjie Snow, Stefflon Don and ADP. His previous releases, including 'Cliche', 'Stats' and 'When I Call Em', saw Ebenezer as he carved the unique path he's set for himself - one of emotionally tinged R&B with hints of trap, completely void of the usual pretence that's flooded the genre. In a way, it could be described as conscious turn-up music, but without a holier than thou message it's simply real. Ebenezer is telling his stories to the world. And when you look at the rest of the British scene, he's created his own sound.

His debut project 'Bad Romantic' truly showcased his signature UK rap aesthetic. An ode to real romance, the EP jumps from energetic deeper trap sounds on tracks like 'Till I Die' and 'Catch Feelings' and transitions to slower vibes with more emotive tracks like 'South of France' and 'Nostalgia', overall rounding this project off as a stunning first release from Ebenezer.

Born in Homerton and now living in Tottenham, Ebenezer spent most of his childhood at a cousin's house in Hackney - himself, his brother and sister and cousins all packed into one room like sardines. While his mother was busy holding down three jobs, Ebenezer would sit in his cousin's house listening to music. "My brother was like the father, looked out for me, made sure I was straight, gave me hand-me-downs, put me on game, don't do this, do this," he says, referencing how they would spend evenings listening to MTV Base, eventually learning to produce.

Having read the book 'The Outliers', Ebenezer practiced the 10,000 Hours Theory which states that if one puts enough time into something they're going to be successful. Except he quickly hit a roadblock: when he finished sixth form, his parents wanted him to go to university. When he said he wanted to do music, his parents gave him an ultimatum of sorts: leave the house, or stay and be in trouble. "My brother had to fight my dad," Ebenezer jokes, explaining how he was eventually allowed to follow his own route, which has lead to him standing out against the rest of the UK scene.

Working out of a studio he would book sessions for friends and other acts in the day while working on his own material at night. Then the cash he was using to rent the studio ran out. "I was going back to back to back for two years, never making any money," he says, "It got to a point where I was like 'Shit, I can't do this no more.' I was having my friends pay for me, having to borrow money I couldn't pay back."

"It was really irritating me. 'I'm out here struggling, what am I doing wrong?'" Ebenezer says of the moment his money ran out.
He took stock of his options, considered other ways to make money. Then a chance conversation with a friend changed his outlook, made him realise your route in life is defined by the energy you're putting out and then receiving in return. "All the negative things amalgamate to an anchor that holds you down. You have to stop caring," he explains of the shift in energy that started to open doors. "The moment I stopped caring, things started happening."

A publishing deal came in, so did management and Ebenezer begun to release his own music, spearheaded by the release of 'Cliche'.
The track set Ebenezer apart from everyone else, as someone from London with a story to tell. "The song came about when I was in Los Angeles," he explains. "I was listening to music and it was depressing me, everyone was talking about the same things: fuck bitches, spend money, buy cars. I'm like: there's more to life than that! How was your day, when you woke up this morning how was you feeling!"

Where other songs exist to replicate a moment, Ebenezer's music is more substantial and timeless. "There are certain songs that transcend just moments, they transcend time," he explains of his approach to music. "Michael Jackson, Marvin Gaye, Prince, J Cole, Kendrick, Jay Z, Nas, Big Pun, Big L. I want my music to live in that timeless genre of music." And off the back of 'Cliche' are three more singles, 'Ask Around', 'Fuck It' and 'Survival' - three tracks of swirling twenty-first century R&B, each with their own personal message, dispensing with stories and life lessons.

Ebenezer is a special artist: one for whom making music transcends ego and is buried deeper in what it means to be alive.
"I'm learning how to express more about the things I wouldn't share with people, the only way I can share it is through music," he says.
"I talk about my family, the struggles of it all, four people sleeping in a double bed in a box room with no radiator, using our bodies for warmth." At the end of the day, he's on a mission, in his own lane. Where other British artists may be focusing on grime or rap he's created something as honest but in one way or another, more exquisite, soulful and reflective.

"Even if you don't love my music you can respect it and be like 'I understand where he's coming from, I feel what you're saying,'" he says of his catalogue. "Even if it's not your favourite track I'm going to keep making songs until you at least have one favourite and can be like 'I really fuck with that song'. I did my job, I tried my best." 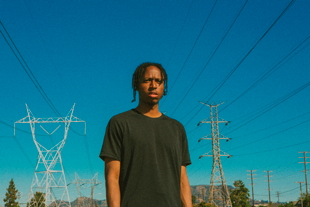